WeWork. You may have heard of it. If not, you need to crawl out of the rock you are living under and get some fresh air. WeWork is the innovative shared workspace provider for entrepreneurs, startups, and freelancers. Simply put, if you need a workspace, WeWork has you covered. For a minimal monthly fee, you can get a desk at one of WeWork’s many physical offices. They are incredible offices as well. See for yourself:

So, why am I writing about WeWork? For starters, I’ve been following their journey for many years now and love what they are doing. While creating some content campaigns, I had some ideas that could expand WeWork’s digital reach and help them continue to position themselves as the leader in co-working spaces. I wanted to share these ideas as general content marketing inspiration, as well as possibly lob the WeWork team a few ideas. Having lived in a large city (where noisy coffee shops are the typical place entrepreneurs and freelancers go to work) I see immense value in what WeWork is doing.

Why content campaigns? First off, they are extremely effective if done correctly. Plus, content marketing is expected to be a $300 billion industry by 2019. So if you aren’t executing on it, now is a great time to start.

Content marketing campaigns can give you incredible content to rank in Google and increase your organic traffic for the foreseeable future. They can increase your brand awareness which results in more direct traffic and branded search traffic. They can give you content assets for social ads, retargeting, and social amplification. The assets created can be used and reused to fit many platforms (e.g.turning your webinar into a SlideShare deck or cutting your video up for promotion on Instagram). Take all of these into consideration and you have quite a cost effective way to market a growing company. Execute properly and the benefits compound by your content growing residually.

A Day in the Life / How I Work

There is a great series that Lifehacker.com publishes called “How I Work” where many successful people share what a day in their shoes looks like. Many of the people featured are successful leaders in technology. The posts illustrate what these leaders daily routine is and what their workspace consists of.

This type of campaign would be phenomenal for WeWork.

Not only does this fit into the central business idea of WeWork, there are many indicators that the campaign could drive a large number of social signals to WeWork.com. Let’s take a look at the successes of the Lifehacker series.

Lifehacker has created around 131 articles in this series to date. Averaging out the shares from these articles, Lifehacker has seen over 65k interactions from Facebook alone. That averages out to roughly 500 Facebook interactions per post. Factor in LinkedIn and you have another 10,859 shares. By leveraging the audience of the influencer who is featured, these numbers could increase even further. Now marry these shares with the 12k+ inbound links and the 11k+ ranking keywords and you’ve got a plan to drive significant awareness!

How it Fits With WeWork

WeWork has access to many entrepreneurs due to the nature of the business they are in. By highlighting an entrepreneur each week, they could easily scale the number of shares, links, and overall brand awareness of WeWork. The “How I Work” aspect ties into the core of what WeWork does; provide an effective environment to build your business. WeWork could highlight entrepreneurs that use WeWork offices primarily. There would be room to expand the campaign to entrepreneurs that have a significant reach but don’t use WeWork offices as well. This type of campaign would paint a vision for what can be built using WeWork’s offerings.

Have you ever seen any of the aggregated startup tool lists that exist on the web? There are many but for good reason! They are insanely helpful if you are trying to grow a business. Typically as a startup founder, you are strapped for cash. You have to get very scrappy in order to throw together everything your business needs to get moving with its first customer. Let’s take a look at examples of startup tool lists.

The first list that comes to mind is the incredibly useful growthsupply.com/free created by Ali Mese. Growth Supply was originally created as a very helpful list of tools posted to Medium. Ali later capitalized on it by creating growth.supply/free, then later growthsupply.com/free. While there are many renditions of this type of post, Ali’s is the most comprehensive that I’ve found. Some of the others available on the web are Makerbook and MAQtoob. 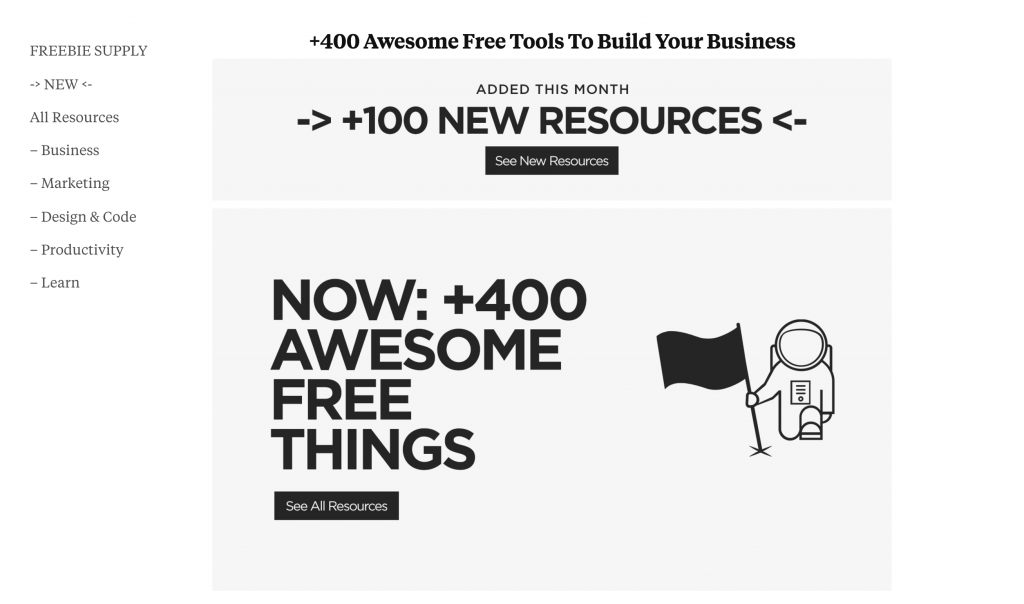 Why would a robust resource like this be beneficial for WeWork?

In order to continue to position WeWork as an authority in the space, WeWork needs inbound links. Inbound links elevate the overall authority of a site and directly influences the ranking power it possesses in Google. Links aren’t solely about ranking though. Inbound links also send through referral traffic. Used wisely, link placements can leverage the audience of the website the link is found on and grow overall brand awareness.

What better way to acquire links than to create incredibly helpful and link-worthy content?

This kind of content campaign would be great to drum up a ridiculous amount of social shares and rankings. However, let’s look at the type of link potential this campaign has.

Ali’s campaign has spanned over three different URLs. One being on Medium.com, and the other two being on Ali’s own site (changed from a .supply TLD to a .com TLD). In total, this campaign has generated over 6k links from 587 different sites. These links aren’t weak links either; the campaign acquired links from sites like Bufferapp, thenextweb.com, and techstars.com.

This type of campaign is great because it focuses on helping readers first. In turn, if your content is good enough, users will help you out back by sharing and linking to you as a resource. Where WeWork is providing content to help entrepreneurs out already, a campaign that provides a comprehensive list of tools and resources (free or paid) would be very helpful and surely drum up many high powered links.

Furthermore, this type of campaign, if properly promoted could be highly viral. An example of this is how Makerbook.net was able to generate thousands of free visits from Stumbleupon.

Lastly, the content created in this startup tools hub can be used on every promotional channel available. Use some of the free images with overlaid text to promote where to get those exact images via Pinterest and Instagram. WeWork could leverage some free videos from some of the free video sites mentioned in the campaign for ads via Facebook and Youtube. The possibilities are nearly endless.

WeWork could start this campaign by curating some of the best resources on the web, similar to curated lists that have been launched in the past. It could further augment the campaign and add in some influencer marketing by featuring influencers in the tool hub. These influencers could share specific tips and tricks that they use to achieve greatness. For instance, designers could share their design tips and tricks, marketers could share specific marketing hacks, and so on. All of which would contribute to the greater goal of giving entrepreneurs the tools for success.

WeWork has an exciting road ahead of them. These are merely two of literally endless possibilities it could tackle to elevate its brand to greater heights. I’m excited to see what path WeWork chooses because just like the WeWork brand as a whole, we know it is going to be awesome.