We all know Apple paid big bucks to acquire Chomp earlier this year so it's probably a big deal and something we should understand.  In this post, I want to dive into how this acquisition affects App Store Optimization.  With iOS 6, we already have visually seen Chomp's impact.  When performing a search in the App Store, you no longer see the vertical list of apps.  Now it's horizontal with a "card" style layout, just like Chomp had in their app.  Many developers have complained that this makes browsing through the results more difficult which makes it harder for apps further right (or lower ranked) to be discovered.  This is true but it now makes the importance of App Store Optimization (ASO) even greater...so that your app is further left (or higher ranked).  However, the layout of the results is not as important as the ranking algorithm that Chomp brings to the App Store.

Let's go back in history.  A long time ago in a gal...excuse me.  A couple years ago, Robert Scoble interviewed the Co-Founder and CEO of Chomp, Ben Keighran.  You can view the YouTube video here.  While I would recommend watching all 21 minutes and 26 seconds, the main part that relates to ASO is from the 2:40 mark to the 5:25 mark.  In a nutshell, Ben explains how Chomp's algorithm works.  Obviously, since that time Chomp, has added more to their algorithm and now that they have all of Apple's data, their algorithm is even more complex and fine tuned.  The interview still provides valuable insight.

The obvious things that go into rankings are the title of the app, keywords, description and the popularity of the app (amount of downloads and user ratings) among others.  SEO is very similar to ASO and in the interview Ben mentions that there obviously aren't links between web pages in the App Store like what exists on the web with web pages.  So what Chomp did was they collected a bunch of data from ratings, reviews and recommendations.  Generally speaking, an app with higher ratings and more recommendations will rank higher than an app with less.  However, because Ben first talked about links between web pages and how that helps with rankings on the web, it makes me wonder how the principle of anchor text could translate to ASO.  I think Chomp actually crawls what words are being used in the app reviews to understand what the app really is about and what to rank it for.  I could make an app and have a keyword I want to rank for in the title, the keywords and the description...and in the past I would have ranked even if the actual app isn't related to that keyword.  However, Chomp knows what an app really is, based on what the users say it is...words used in the reviews.

The screenshot below shows the 4 latest reviews on an app.  It isn't until the 4th one that you find out that the app is a flashlight app. 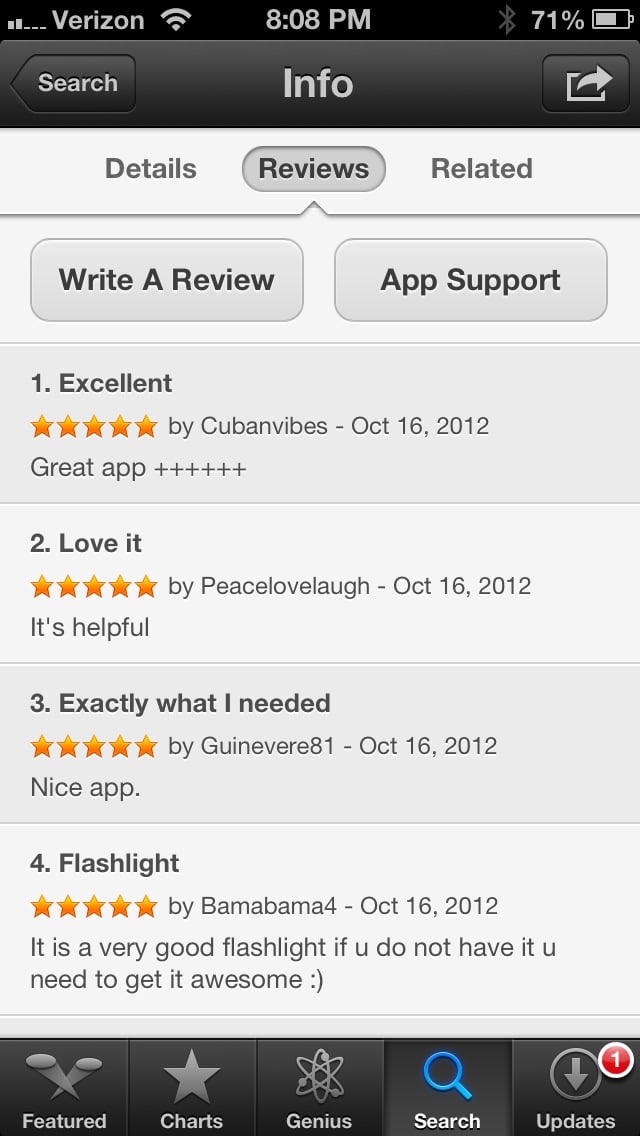 While all 4 reviews are great and they are all 5 stars, it would be much better to have the keyword "flashlight" in the other 3 reviews.  If this developer also wants to rank for "best flashlight" or "free flashlight", then it'd be best to have those phrases in the reviews as well.  This principle also goes for reviews on app review sites like 148Apps and appolicious...granted, those reviews are in much more detail and will most likely use the keywords for which you want to rank.

Tying this back to SEO, a review for an app is like a web link.  Just as the anchor text of the link is used in SEO, the words used in the review of an app tell the search engine (in this case Chomp/Apple) what the app is about...and basically what keywords it should rank for.

Strategies on how to get users to use your targeted keywords in their reviews?  That's a blog post for another day!

What words are being used in reviews is the key takeaway I got from the interview with Ben Keighran but there are many other factors that go into the algorithm.  While writing this post, I spoke with Robert Scoble about his interview with Ben and any other insights he thinks are taken into account in the algorithm.  He was walking through an airport during our phone call so he probably couldn't think of everything in his mind but he touched on a lot about the impact of social signals.  With the integration of Facebook in iOS 6, that makes this factor a no-brainer.  But Robert pointed out that he could see Apple pulling data from Twitter as well to see what is popular and what the user sentiment is.  He also mentioned that Apple and Twitter have a good relationship so Twitter would probably be okay with Apple using that data.  I'll definitely start researching and experimenting more with social signals and their effect on app store rankings.

I'm headed to San Jose today to attend App Conference and GMIC so I'm sure I'll discover more ranking factors.  I'll be sharing a lot on Twitter and Google+ during the conference so follow me for updates.  I'll also write a post here on the 97th Floor blog about what I learned so watch out for that.  I'd love to hear your thoughts in the comments on the interview with Ben, the importance of reviews and any ideas you have.