Repurposing, repackaging, up cycling---whatever you choose to call it---I’ve been speaking a lot about this over the last year. Based on the feedback I’ve been getting I think some people are missing the boat. Part of the problem is the temptation to treat what marketers say as scripture, instead of taking things with a grain of salt and testing and retesting recommended strategies yourself to determine their validity. On that note, let me clarify how we at 97th Floor have used repurposing as an effective part of our overall marketing strategy.

Recently I was talking with an in house marketer friend of mine who had just started a new gig. In reviewing proposals from a recent RFP request, my friend said that one of the proposals was to use a repurposing strategy as the sole component of the company’s entire marketing plan. In other words, the company’s ENTIRE content marketing strategy was based on taking existing blog posts, videos, eBooks, along with any other previously created content, and simply repackaging it.

When repurposing becomes the core of your marketing strategy, all kinds of problems and limitations can arise from this “assembly line” mentality. A better approach, which has been my spiel all along, is to treat content marketing as a campaign. Think “Movie Release” and be everywhere. 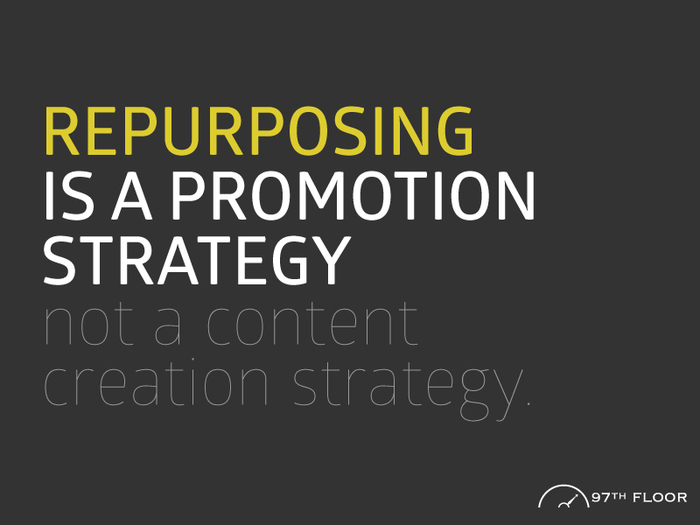 Repurposing is for promotion not creation.

Does this mean you shouldn’t go back and look at analytics and turn blog posts that were hugely successful into slide decks or videos or graphics? Of course you should. But repurposing content---even great content--- cannot be the sole basis for bringing in new business. Let’s face it. Anyone can take something that already exists and repackage it for a quick and easy win. But if your goal is to solve the more complex problems, such as generating more sales, traffic, and brand awareness, you are going to need fresh new ideas. Then you take those new ideas and repurpose them, turning that graphic or that stand-alone blog into a promotional campaign---a full-scale assault that succeeds on several different levels. The C-Suite does not care how many pieces of content it takes to move the needle. 1 to 100 it makes no difference, just move the needle. If you are being judged on how many pieces you output per month then your boss has the wrong priorities. If you're an Agency you have the wrong client or you sell your services the wrong way. 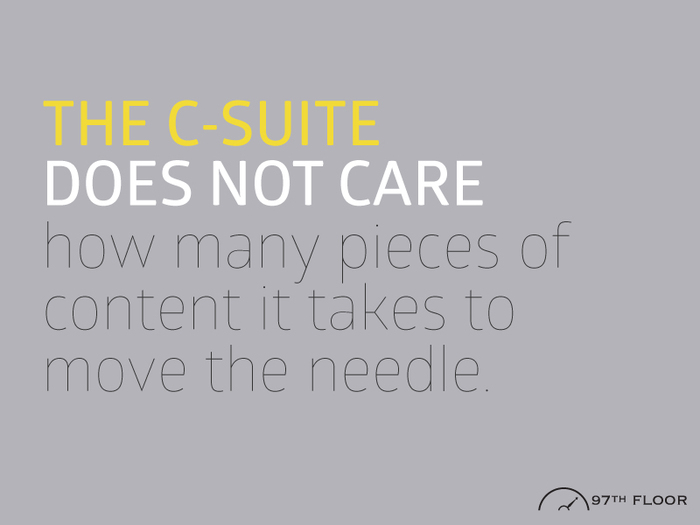 I get it. Ideation is a lot harder than repurposing. But take the time and effort to come up with one really good idea---an idea you can customize for your target promotion sites and use them to help with exposure---and you’ll reap the benefits. Your goal should be one good solid campaign per month, instead of 10 so-so campaigns with no promotion leg to stand on.

And speaking of promotion…

20% of Content Marketing Success is Idea, 80% is promotion. (If that idea is “first to market”/ground breaking then flip those stats, more on that in a future post). When you have 10 thin ideas and no time to promote, what do you get? You get a lot of pieces with less than mediocre results.

This doesn’t mean that you stop anything that is working just to focus on one idea per month. As I said earlier, what matters most is that you are testing and proving, then sticking with and building on whatever strategy is working. Don’t stop at just one per month either, that just makes for easy examples, if resources allow then sky's the limit.

Here is the deck that created a lot of questions regarding relying solely on repurposing. It's from SMX Advanced 2014