Revolutionary branding can change how customers perceive an entire industry, but few companies are willing to take that step in the dark. Uncharted territory comes with a lack of data and research to back your efforts—it takes guts.

The brands below have pushed past the middle and completely opposed branding expectations in their industries by standing out from their competitors or redesigning their old identity—and it’s paid off in spades.

“If you always just try to sell, then you’re predictable. You’re every other brand and company out there.” —Michael Lee, Oatly Creative Director. Oatly stands out—we all saw the controversial SuperBowl commercial. The alternative dairy brand embraces unapologetic fun while still communicating its core values.

Part of what makes Oatly so appealing is its contrast with other milk brands. Picture any other dairy brand—the homepage likely has a perfectly composed stock photo complete with a heartwarming description of the product. Swap the milk out with any other household item, like Windex or Clorox, and you don’t have to change a thing.

Oatly stands way, way out with a cartoony, playful, almost handmade aesthetic website. When photos are included, they’re messy and candid — almost like a friend took them. The copy has an unpolished, almost rambling feeling that is nothing like its competitors' carefully crafted, “clean” taglines. 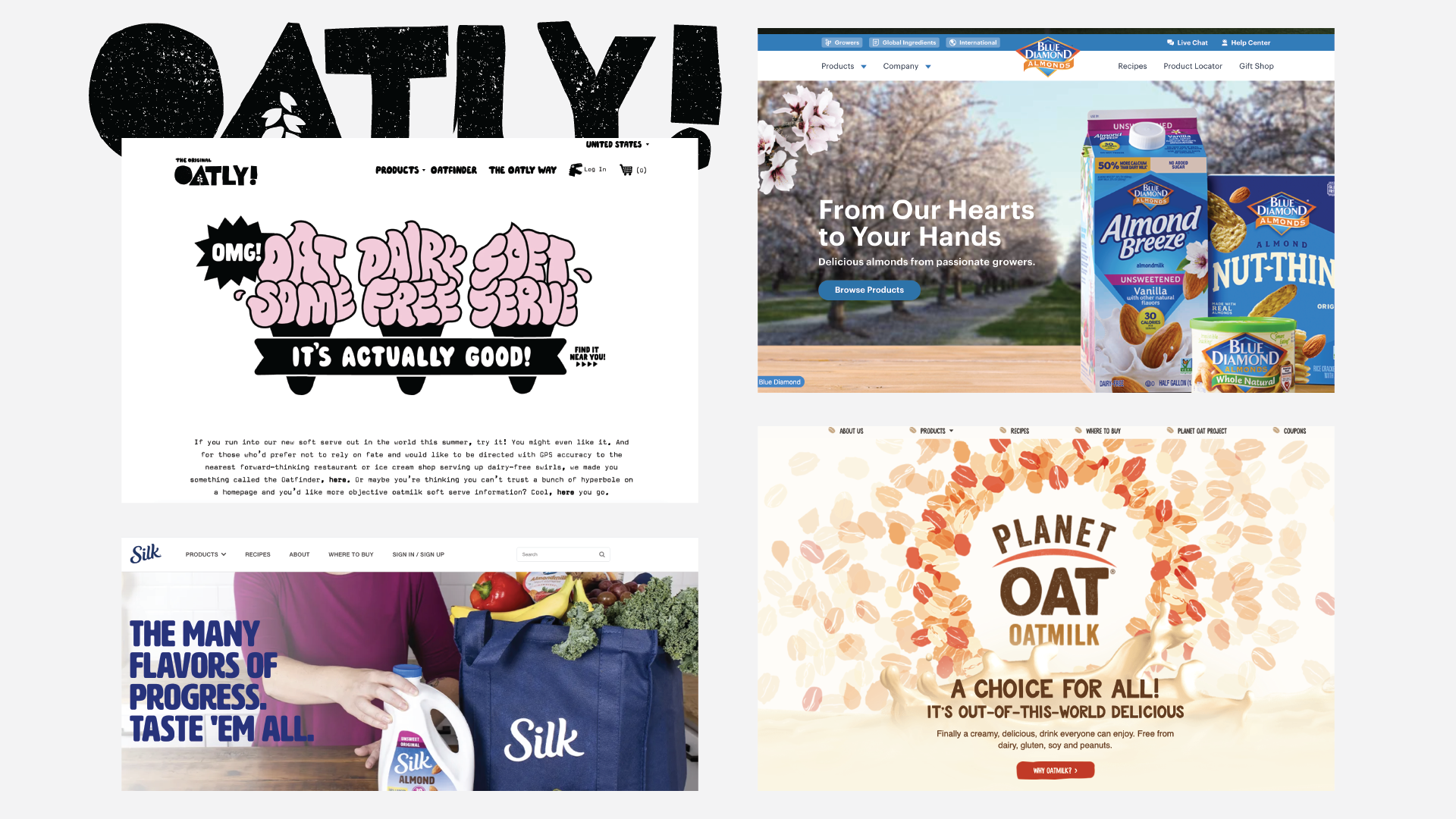 Oatly doesn’t use industry competitors as models for what they should become. While other brands fill their website with recipes to sell more product, Oatly's recipes are only a fraction of the available content. The bulk of Oatly’s content is dedicated to being interesting. The brand even has a section dedicated entirely to "Things we do" that has unique content to make audiences smile.

Lee revealed the core of Oatly’s branding strategy: “Don’t try to sell anything — just be interesting. If you’re interesting, people will pay attention to you and they’ll be interested in what you do next.”

How do they do it though? Oatly takes an unstructured approach. The creative team chats about content that would be fun to create and then they make it a reality. Lee explains, “We produce our own work, and we prove our own work. There’s no filter, no checkpoint meetings with the sales guys, no half way meetings with marketing managers.” This method allows content to land with it’s full creative potential  preventing leadership from watering it down. Creating without gatekeepers is a terrifying prospect for many companies, but Oatly doesn’t let this hold them back.

Do This: Trust in creative teams and whatever you do, don’t be content in the middle ground.

Is the strategy of simply being interesting paying off? Oatly is claimed to be the world’s largest oat milk company and 2020 saw a 106.5% increase in reported revenue. Oatly is Starbucks’ oat milk of choice, and there was even a time when people were selling their supply of Oatly for over $200 on Amazon.


SaaS companies are infamous for ambiguous copy and visuals that all look the same. When every solution looks the same, customers quickly lose interest and have a difficult time keeping track of the unique value each solution offers. Gong, a revenue intelligence software is...different.

Let’s take a look at the websites of some other sales platforms. This industry is ruled by clean designs, cool colors, futuristic gradients, and flat illustrations. 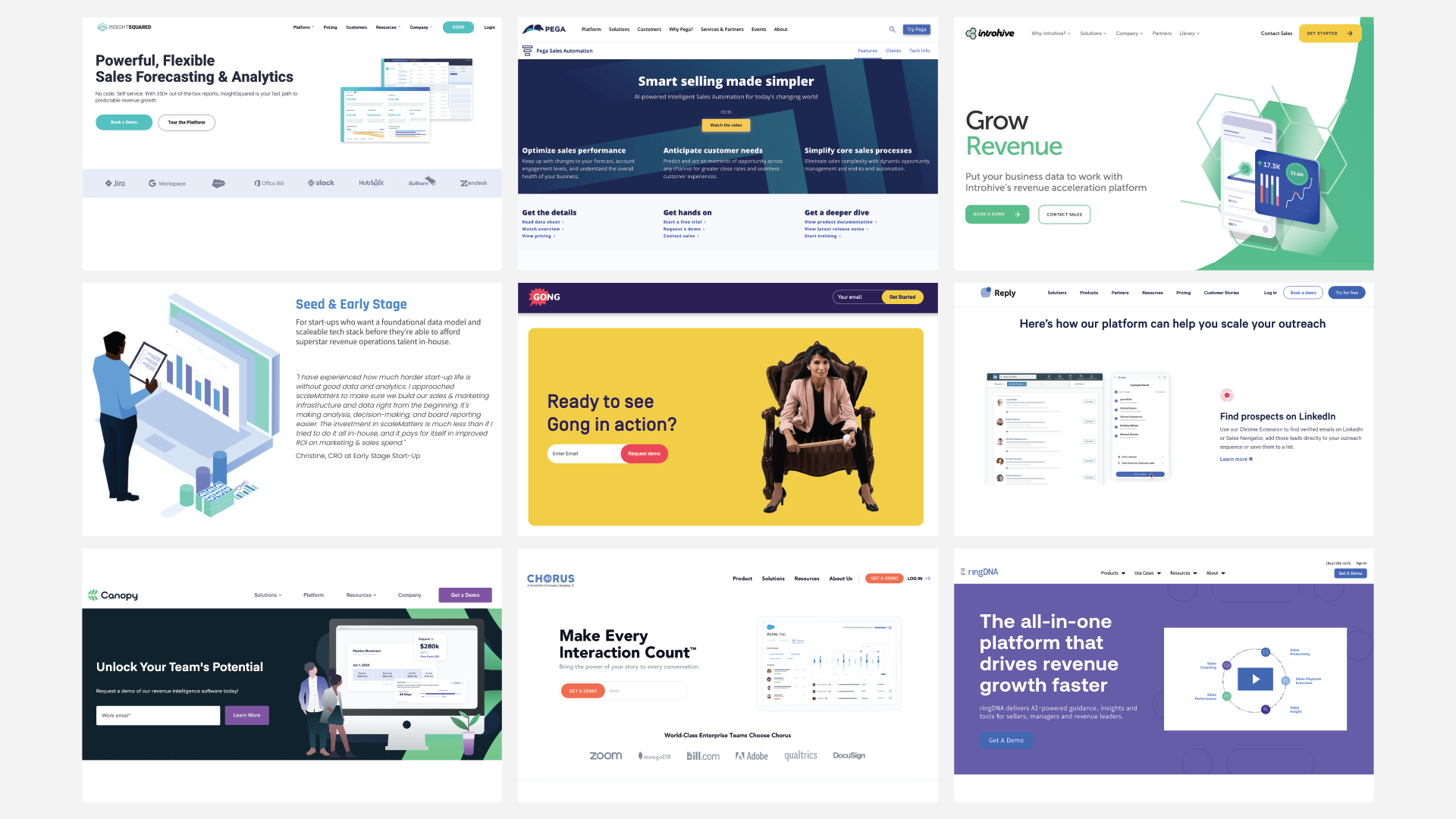 Then there’s Gong with fun stock photos, bright colors, and a playful pooch as its chatbot representative. The smooth UX and attention to quality (albeit stock photo quality) allow the brand to take risks in an otherwise streamlined market.

While some may not enjoy the cheesy nature of its aesthetic, Gong doesn’t really care. CMO Udi Ledergor acknowledged, “If you’re pleasing everybody, you’re not exciting anybody.”

Do this: Carve out your own identity and carry your voice throughout every piece of content.

Ledger continues “When you read our content, when you hear one of our amazing speakers at a conference, when you look at our website, when you go to our LinkedIn content, you see that whimsy coming through everything we do."

This commitment to a consistent voice allows Gong’s audience to instantly recognize every piece of content they create. More importantly, audiences can differentiate Gong from the sea of other software companies who are pushing the same message. 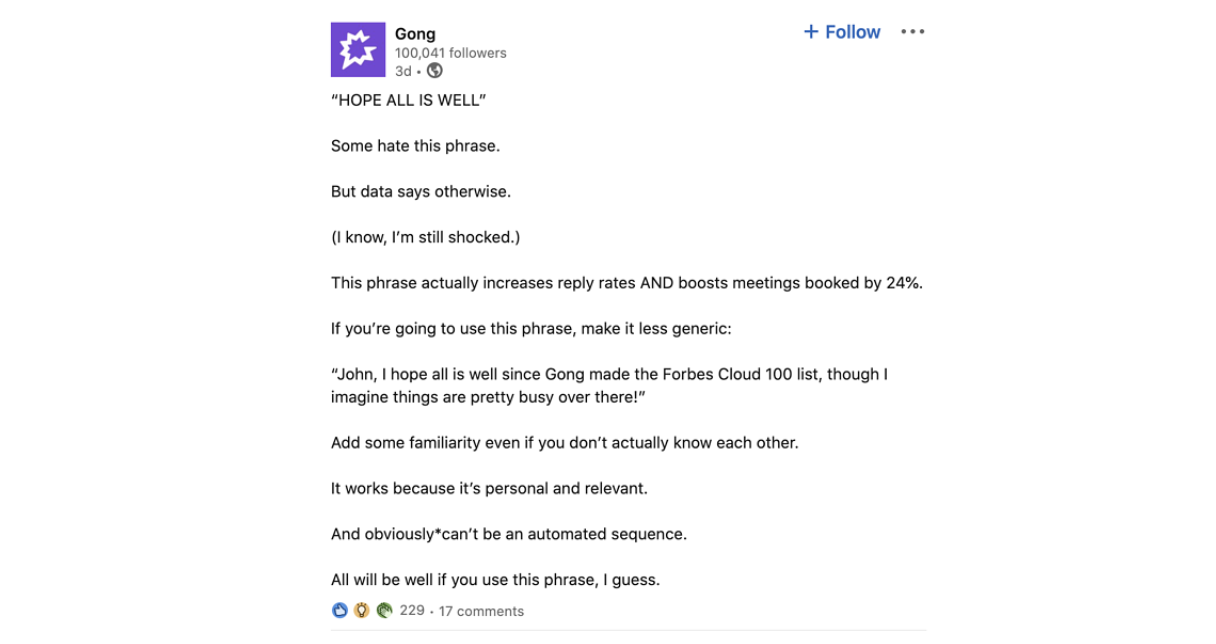 As of June 2021, Gong raised $250 million in funding and ranked top-50 in outstanding growth within SaaS companies—not bad for high-fives and fist pumps.


Billie was the first to push the boundaries in the women's razors market by using body hair in images and fighting against the pink tax. In an interview, Billie Cofounder Georgina Gooley shared the inspiration behind the brand’s identity. “We knew we couldn’t just sell a better product at a better price — we wanted to reinvent the category’s relationship with women.”

For decades, razor brands have depicted the ideal version of a woman. Women were told that their body hair was something to be ashamed of, something needing to be removed. “We've always wanted to put our audience ahead of our product, so emphasizing the importance of choice has always been core to what we believe.” 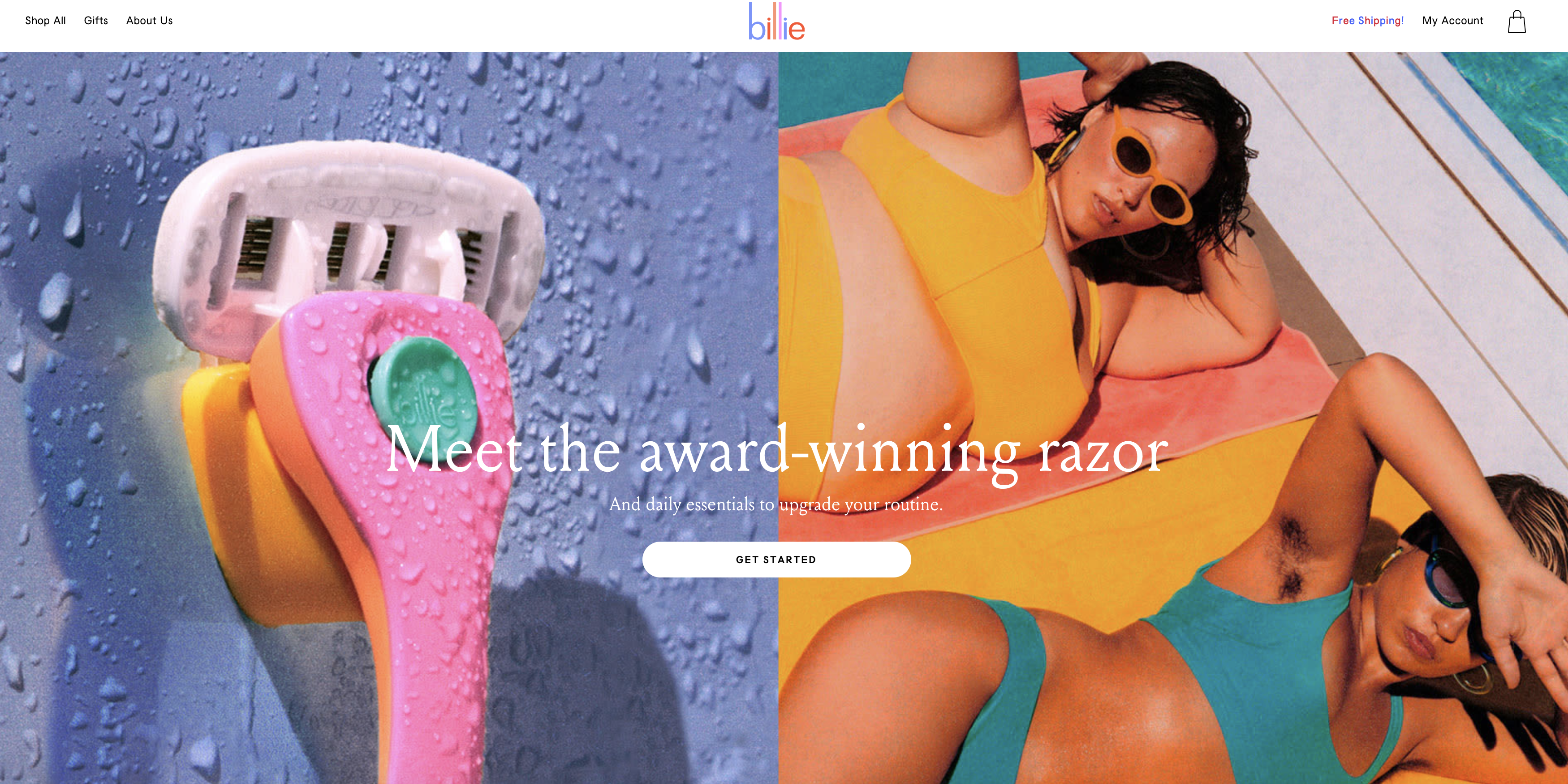 Billie’s competitors have quickly followed suit. As Gooley points out,“The fact that a new, challenger brand like Billie could change the way women are represented in a century-old category shows that even the newest players have the power to create change.”

Although Billie’s competitors have slightly adapted their imagery, their core branding has stuck closely to the refined, spa feeling we’re used to seeing from razor companies. Billie takes a bold approach to branding with bright colors, body-inclusive models, and 90s throwback styling.

Beyond bold visuals, sticking closely to strong values is what sets Billie apart from other brands.

While overthrowing the pink tax by charging less and offering rebates means smaller margins for Billie, audiences see the dedication to a cause and become lifelong fans. While other companies say they’re committed to women, Billie actually backs up their statements.

Do this: Permeate purpose-driven values at every level of the organization.


You’ve never met a more hardcore water brand than Liquid Death. The company’s energy-drink-inspired branding is a complete 180 from the peaceful, flowing springs used to market other water brands. The tagline “MURDER YOUR THIRST” seems a little contradictory when marketing an essential-to-life product like water, but Liquid Death’s alternative aesthetic has earned them a cult following.

CEO and founder Mike Cessario explained that the core idea for the brand was inspired by the hilarious, random marketing in the junk food market. “Liquid Death was a way of taking the healthiest food you can drink and brand it and market it in a way where you can compete with all the crazy marketing of junk food.” Liquid Death is unique because it’s not really competing with other water brands.

Do this: You don't always have to be better—different accomplishes the same goal.

Obviously, an irreverent take on water won’t please everyone—something that Liquid Death actually capitalizes on . Its music albums (punk rock screamos with lyrics taken directly from social media hate comments) are a brilliant example of Cessario’s genius—owning the brand persona from A-Z, but also pursuing every possible avenue for that strong brand to present itself. Yes, it takes a killer brand (pun intended), but companies rarely scratch the surface when it comes to brand distribution opportunities.

But it’s not just a silly brand, they’re owning up to values by pledging death to plastic, positioning as an environmentally friendly alternative to bottled water.

Liquid Death can be bold with their branding because leadership knows who they really are. As Cessario puts it, “Hard work is a waste of time if your idea sucks. Figure out how you have a great idea first before you then start putting all the blood, sweat and tears into it.”

Don’t just be bold for the sake of it. Be bold because you believe in what you’re doing. The boldness is working—Liquid Death has cultivated a loyal following and grew 126% last year.


3M isn’t just trying to stand out in its industry, it’s trying to stand out from itself. A quick look back at the 3M website reveals that its messaging has transformed from a focus on innovative technology to applied science and connecting with the people who use 3M products. Over the years, technology imagery has given way to people-centric visuals. 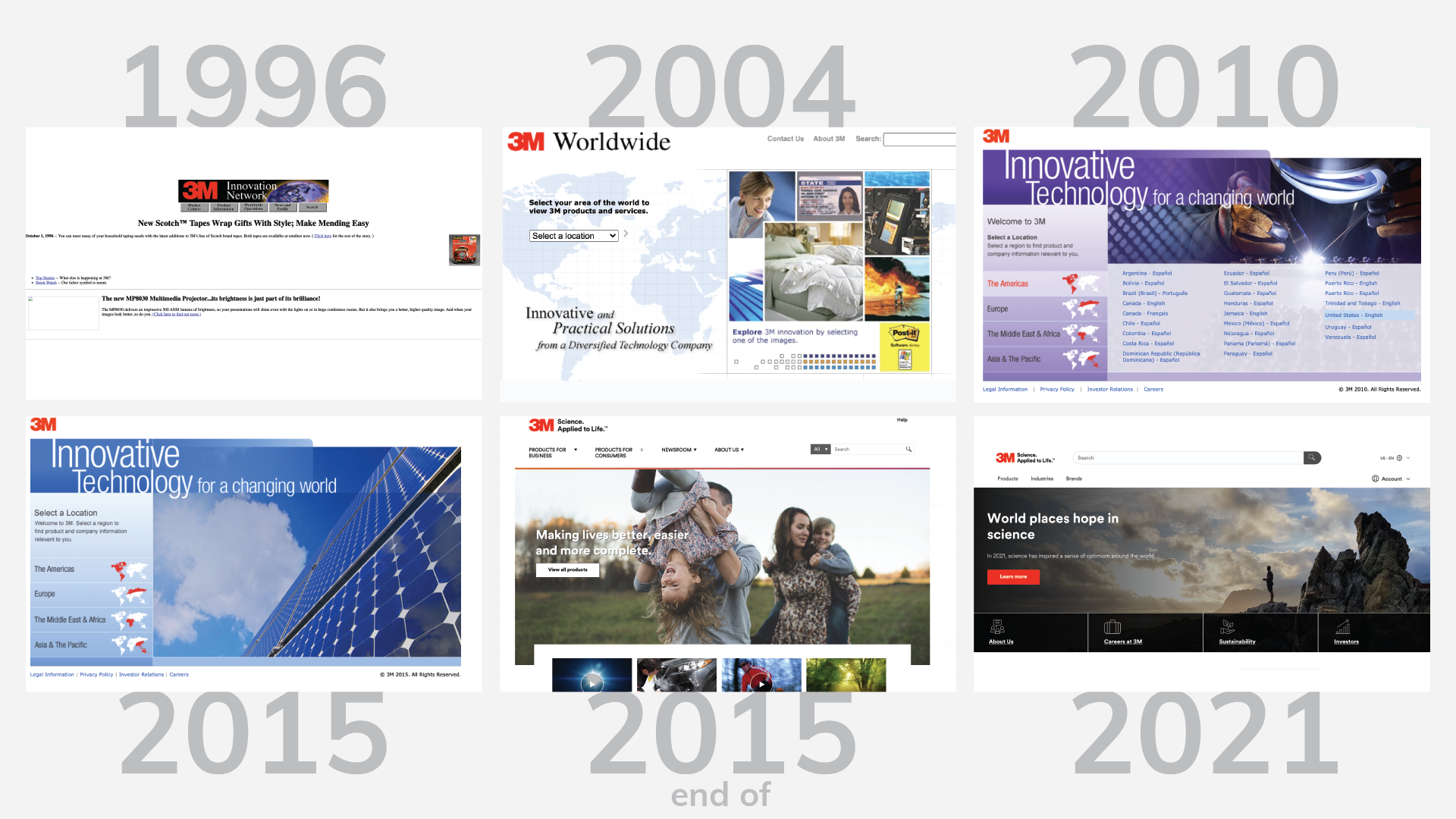 3M has countless products in various industries, but you probably know them best for their tape. Despite consumer business being the least profitable sector at 3M, this is an area that the brand focuses a lot of marketing effort on.

By focusing on individual consumers, 3M is able to focus on messaging that resonates with people. Because at the end of the day, B2B and B2G customers are just people.

Do this: See your audience as humans—market to them as humans.

Making science fun and accessible to all is at the heart of 3M’s marketing strategy. CMO Remi Kent explained, “We really wanted to show that creativity of how you might use our products in a nontraditional way, but in a way that could provide your family with an outlet for fun.” 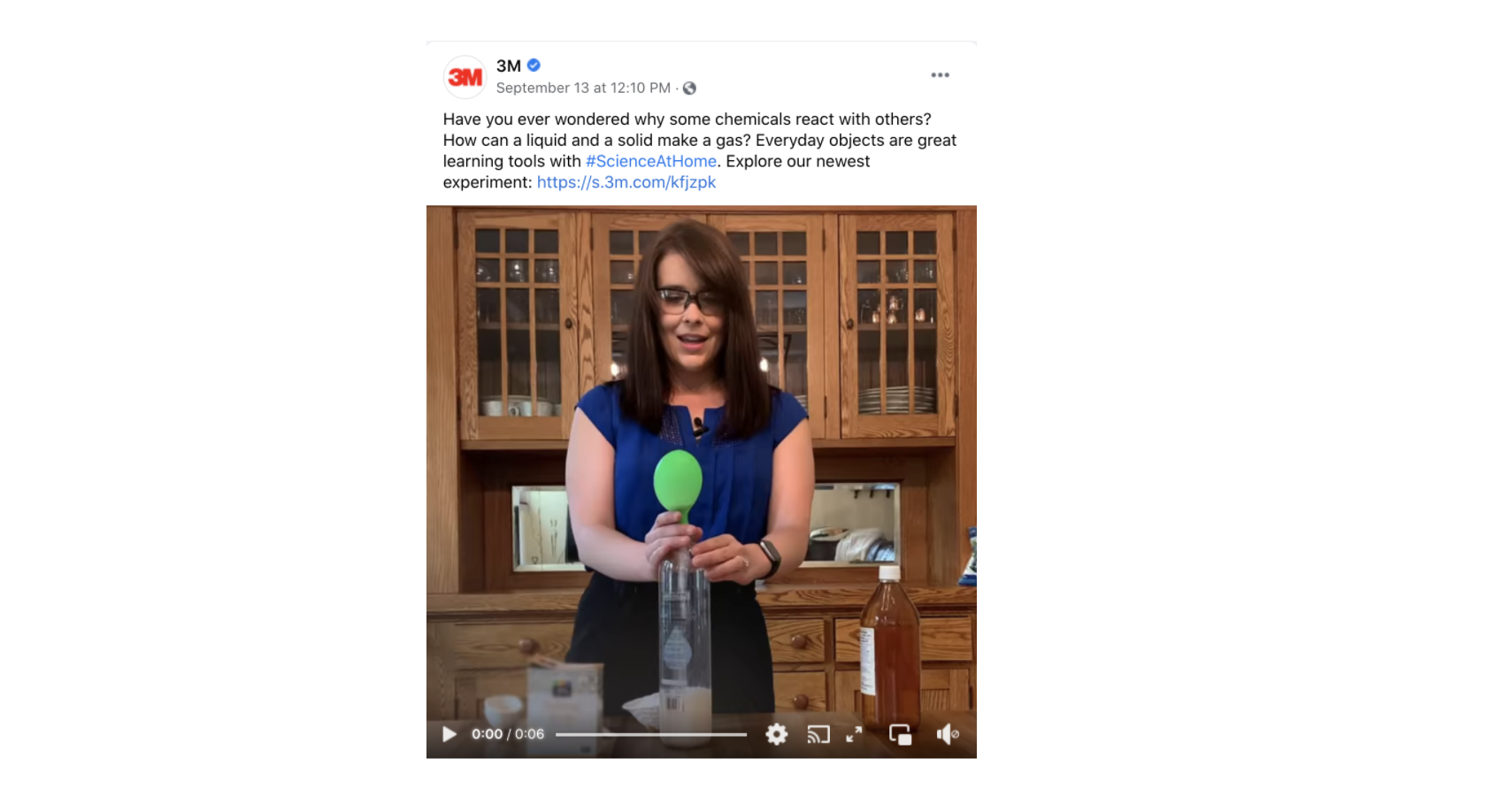 It's a bold move to market to the individuals who interact with your brand rather than your largest profit segment, but 3M understands the value of its consumers’ opinion of the brand.


Many brands have taken up TikTok in the past year, but The Washington Post is the first in their industry to embrace the platform. What makes this a bold move? The majority of Gen Z isn’t interested in keeping up with the news, so gaining any traction on an app dominated by 16 to 24-year olds isn’t an obvious slam dunk.

What led The Washington Post to invest in TikTok? Their audience is rapidly aging and rather than doubling down on its existing audience, Washington Post decided to explore a new audience and meet them with the type of content they wanted to see.

The Washington Post TikTok guy, Dave Jorgenson, revealed his strategy in an interview. “I'm not trying to be the old guy that shows up at a high school party and has no right to be there.” Rather than trying to fit in with the cool kids, Jorgenson embraces the fact that he represents The Washington Post and shares news in a fun and engaging way. "Hey, if you guys want to listen over here, I have some news. Maybe you'll learn something today."

In contrast to pristinely-edited articles that Washington Post is known for, the news brand’s TikTok is full of messy, imperfect content. That’s because on a platform that values fresh content, frequency is more important than polished branding.

Do this: Know the platform and audiences you’re speaking to and strategize if quality or quantity of content is most important.

The Washington Post is investing in avenues and audiences that will become crucial to its survival as it grows. Who knows—TikTok may be the primary news channel of the future.

Take the Risk — Be Bold

No matter the industry, each of the brands above has challenged standards and risen above. They’ve branched out creating better spaces for their consumers—but certainly not without risk. So now it’s on you—what risks are you willing to take for your brand?