What Are Millennials Expectations From Work? Not What You Think

Depending on who you ask (or which result you click in Google), the years of birth to be considered a Millennial range somewhere between 1980 and 2000. So being a proud 1986er myself, I’m perfectly qualified to chime in on what Millennials expect from work.

When I first started hearing about Millennials and their stereotypes, I figured the term referred to people much younger than myself. Teenagers. The kids that had cell phones in elementary school. The kids on Snapchat. They couldn’t be talking about my age group. I used payphones in high school, after all! And of course I didn’t pay for the payphone...like anyone my age knows, I used the Collect Call trick. (My parents received and declined a lot of phone calls from “HeymomitsWayneI’mreadypickmeup!” and I always got picked up.) I had dial-up internet in high school. And no, we didn’t pay for it...like anyone in the economic situation like I was growing up knows, I kept taking the free AOL CDs from Walmart to use the free hours, and then once that was out we’d pop in a new one with a new email address.

I was wrong, though. I am in fact a Millennial, and those “kids” are part of a new generation called Generation Z.

To be honest, for these last seven or so years, I’ve been slightly ashamed of being a Millennial. Maybe embarrassed is a better word for how I felt. Everything I read, heard, and watched made Millennials seem pretty terrible. Especially in the workplace. What Millennials expected from work was bean bag chairs, video games, snacks and a keg. Oh and don’t forget about the ping pong table. For all of that time spent having a party at work, we wanted immediate raises and promotions.

Well, I didn’t feel like I fit this narrative. Sure, I came across a handful of Millennials that matched the profile, but I was somehow lucky enough to mostly surround myself with and know Millennials like me. They didn’t expect those types of things from work, either; nor did they/we necessarily want them.

I’ve come to find out in recent years that all of that was a myth. Click bait. Attention-grabbing consultants. There were a few studies that seemed to prove those stereotypes were facts, but the research was poor. They mainly tried to show the differences between generations. Academics have looked at these so-called studies and have concluded that there have been “gross generalizations based on weak survey research, and the speculations of profit-oriented consultants should be treated with extreme caution.” A group of researchers from George Washington University and the Department of Defense concluded that “meaningful differences among generations probably do not exist in the workplace.” While there are some differences, those have more to do with age and the stages of life people are experiencing. You can read more about how Millennials don’t differ much from other generations in this great article published on Harvard Business Review by Bruce N. Pfau.

Below are results from two studies that actually show Millennials to be pretty much the same as Baby Boomers and Gen Xers when it comes to what they want out of work. While all generations were very similar, it is interesting to see Millennials cared the least about having a fun place to work. If your company is spending more attention and/or money on video games and ice cream parties than it is on trainings and education, you have a problem. 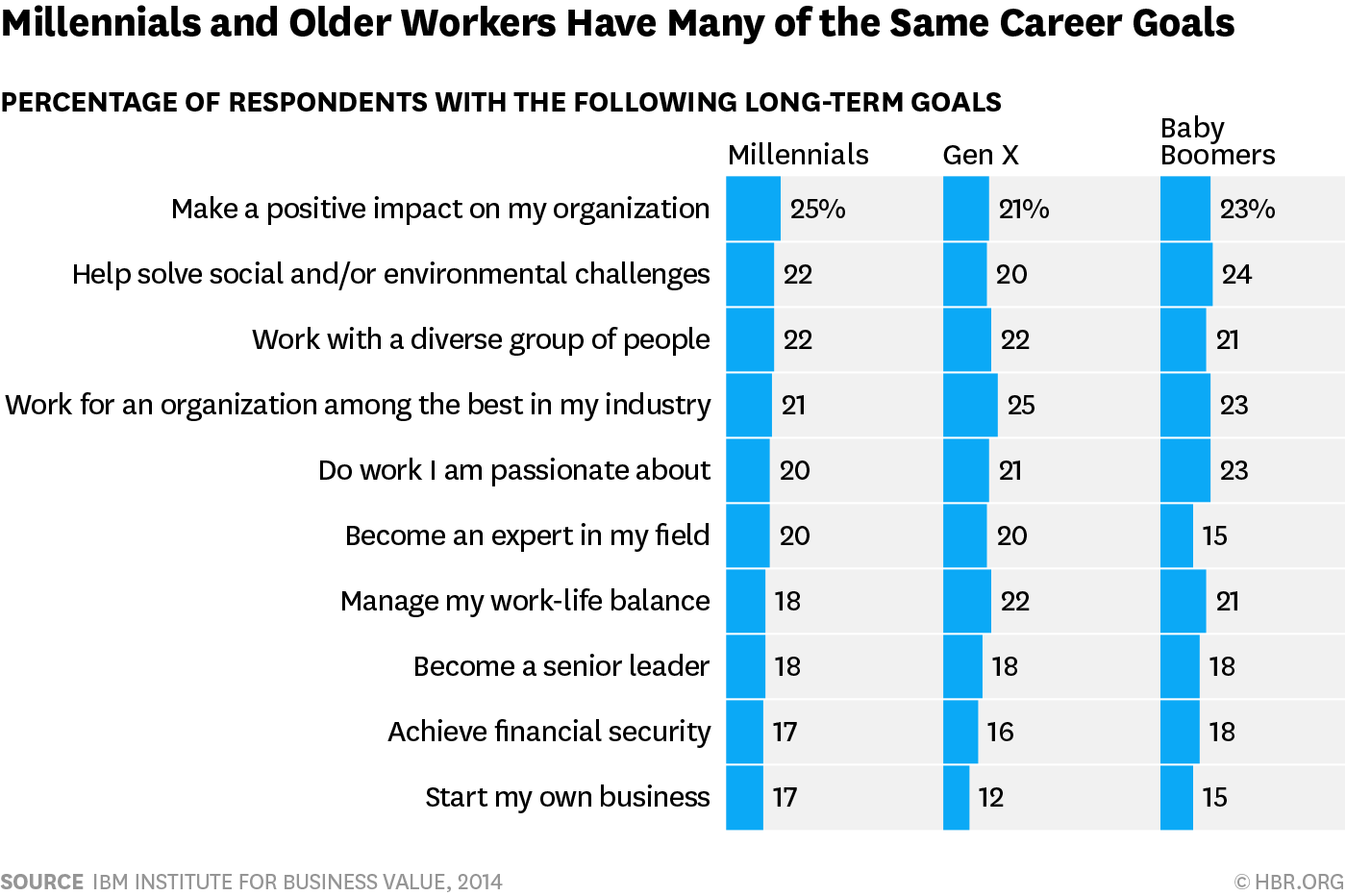 I’m no longer embarrassed to be a Millennial. We’re not much different from other generations when it comes to the things that really matter, especially in our careers. We want to do great work. We want to continue to learn. We want to add value to our companies. We want to work with great colleagues. We want to grow and take on new challenges. We want our work to positively influence our lives outside of work and vice versa.

At 97th Floor, we’re mostly made up of Millennials. We do have some Gen Xers on board, and in the past there have been other Gen Xers and even Baby Boomers. When I heard those people describe the company culture at 97th Floor as the best they’ve ever been a part of, I figured they were just Millennials at heart and were finally at a company geared towards Millennials. But over the last couple of years, I’ve realized it’s because a great company culture like the one we have at 97th Floor doesn’t only appeal to one specific generation. I believe that, now that there is more transparency (the internet in general and specifically Glassdoor), companies need to focus on company culture to stay competitive. This is a good thing, of course, and all generations are benefiting from the change.

Be Your Own Boss

My dad used to tell me to be my own boss when I grew up. At a young age, I figured he said that because bosses are the ones that make a lot of money. As I became a teenager and young man, I started to realize that his advice didn’t really have much to do with making a lot of money. His advice was to stay away from the typical company that controlled their employees and created a labor force of disengaged employees. We still have plenty of these types of companies today.

At 97th Floor, we essentially want people to be their own bosses. We want them to receive the benefits of being their own boss without having to deal with the accompanying downsides. To me, it comes down to giving our employees five things that most companies don’t allow them to have. That lack often leads to disengaged employees or employees who leave for a company that provides those benefits, or even start their own company. Each of these points could be the basis for a whole article in itself, but for now, I’ll just share a couple thoughts on each.


As Dan Pink teaches in his book Drive, autonomy is one of the things that truly motivates people. Traditional company cultures strip autonomy away from people. Autonomy in the workplace encompasses the employee’s time, team, task, and technique. We try our best to give each employee at 97th Floor 100% autonomy over these things. We allow people to choose the teams they want to be a part of. It’s not uncommon for teams to make offers to one employee and the employee chooses which one they want to take. This is similar to the open market, except that it is happening within our company. We also are a ROWE organization, which really helps us give employees 100% autonomy. We just demand 100% accountability in return.

The ‘time’ part of autonomy seems to be a particularly important factor for Millennials, though it’s really important for everyone. A survey by Intelligence Group found that 74% of Millennials want flexible work schedules and 88% want “work-life integration.” If you’re your own boss, you work when you want to, so long as you can achieve the necessary results.

In the same survey by Intelligence Group, 87% of Millennials said professional development was an important part of their job. From my experience, most companies do a pretty good job with helping their employees develop their knowledge and skills. However, one thing few companies do a good job at is allowing employees to expand their knowledge and skills outside of their position. As a business owner, you learn and develop skills in pretty much every facet of business. While not every employee will care to learn a lot about every part of the business, it’s important for the company to provide those opportunities for their employees. It separates the person from the position, which is a good thing. The company pays the employee for the position they fill, and at the end of the day, the company judges the employee on how they perform in that position; but the employee needs to know that they are viewed and treated as an individual and not just a role.

As a business owner, your income is 100% tied to your work. As an employee, it sometimes doesn’t feel this way. Too often, you feel like you’re taking a lot more work and not seeing more income. While it’d have to be a very dumb company or manager to not recognize a star performer and then compensate them, there is a lot of room for improvement for most companies. At 97th Floor, we have a financial structure for almost all of our employees that rewards them for their productivity and efficiency. It’s not perfect, but it’s an attempt to make employees think like business owners, and it’s helped us a lot over the last few years. We allow employees to decide if they need to hire another person on the team or if they really need that new tool. If they can be more efficient and not hire that person or buy that tool, that money comes back to the team. However, if those type of decisions hurt their productivity, that will hurt their earnings potential. So it’s a constant balance of productivity and efficiency—just like a business owner has to do. While that’s a challenge, it does give control to the employees and allows them to feel that they have a say in their compensation.

4. Coaches and mentors, not bosses

As part of our ROWE certification, we were trained to call managers (or bosses) by a new name: “Results Coach”. While we’re not perfect and you’ll still hear “manager” and “boss” being used at 97th Floor, we do a pretty good job of acting like results coaches. The basic difference is that, as results coaches, we set the results we want our team to achieve and the timeframe to achieve them. From there, we get out of their way, help when needed, and give advice. There isn’t the stereotypical boss attitude of “my way or the highway.” In the previously-mentioned survey by Intelligence Group, 72% of Millennials would like to be their own boss, but if they have to work for a boss, 79% of them would want that boss to serve as more of a coach or mentor.

Most people care about more than just money. However, many companies focus almost entirely on revenue. So when you’re an employee, there’s a good chance you’ll end up at a company where your only purpose is to drive revenue. In the Intelligence Group survey, 64% of Millennials say that making the world a better place is a priority for them. If your employees don’t feel that they are accomplishing this, they’re going to leave and find a company where they can feel that purpose. Barring that option, they’ll start their own companies so that they can be their own boss and direct the purpose of the company themselves. 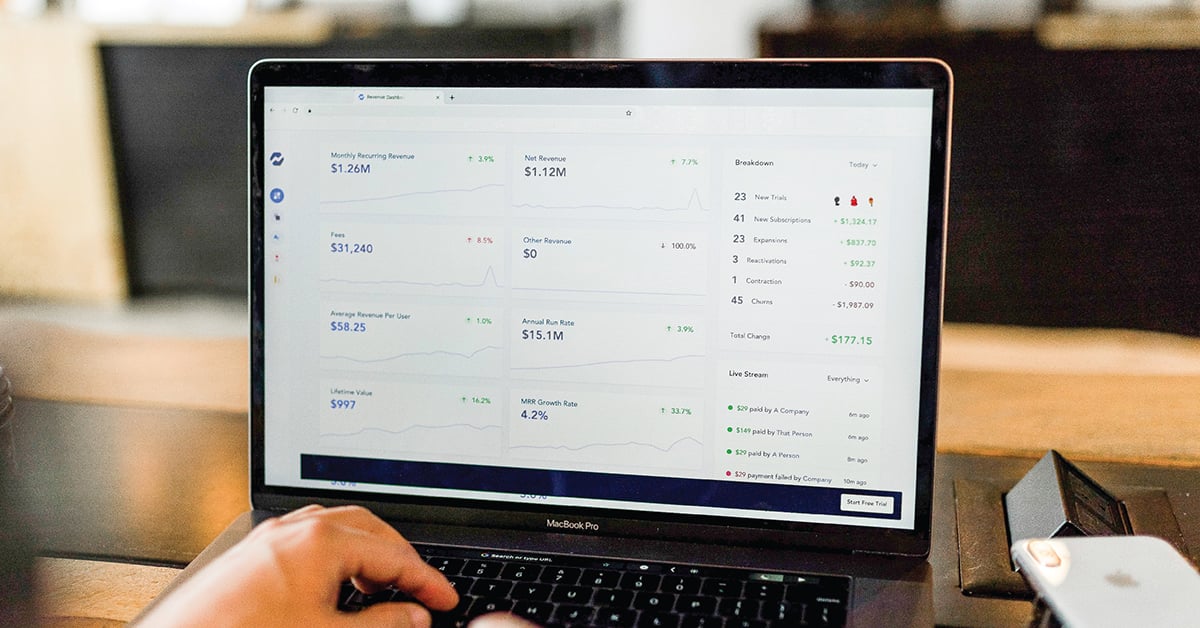