Every dirty detail from the Trump and Biden digital marketing campaigns

Political campaigns are some of the most visible, wide-reaching, and polarizing marketing campaigns. They operate off of enormous budgets with highly condensed timelines, and digital strategy has become an increasing priority as audiences shift online. But even Presidential marketing has its oversights and faux pas.

At 97th Floor, we were curious about how these two campaigns were tackling digital, so we decided to utilize our expertise in performing large-scale audits for both the Biden and Trump 2020 campaigns. We have the best specialists in all of these fields, and we asked our teams to treat these campaigns just as they would a client, auditing every inch that they could.

After combing through both audits we cherry-picked and pulled the most engrossing snippets into the final version on GetThatVote.com. Read ahead here to see just a few of those highlights.

All the gory digital details

On a grand scale, the Trump campaign acts as one might expect: big budgets, pushy messaging, and dated tactics. But, while wasted budget is never a pro, the Trump campaign seems to understand its core audience. The campaign’s focus and budget, as well as messaging, are highly targeted to dyed in the wool, red “Patriots.” Team Trump’s digital tactics mirror that of the entire campaign — braggadocious — largely catering to those who are already his fans. Additionally, the Trump campaign presses much harder for donations, which could be one explanation for its ability to outspend the Biden campaign at every turn.

In contrast, Biden’s team hones in on the fringes and the undecided — those who have been historically election-determining, an obvious audience for this (and every) election. This showcases itself in a strong focus on swing states with budget, and a somewhat-humble focus on “togetherness” and “unity” in messaging. The Biden campaign also pushes for a professionalism and issue-based copy that Trump has largely overlooked. A little surprising is the consistently smaller budget from the Biden side, however it’s possible that Team Biden is holding back to increase spending when it matters most, that last month.

Overall, each site caters to the strengths of its candidate. The Biden site emphasizes unity in diversity, with photos of Biden with others rather than alone, and copy that includes words like “together.” Trump’s site leans into the fame of Trump himself. Mentions of specific goals or stances are overtaken by Trump-focused photos and messaging. 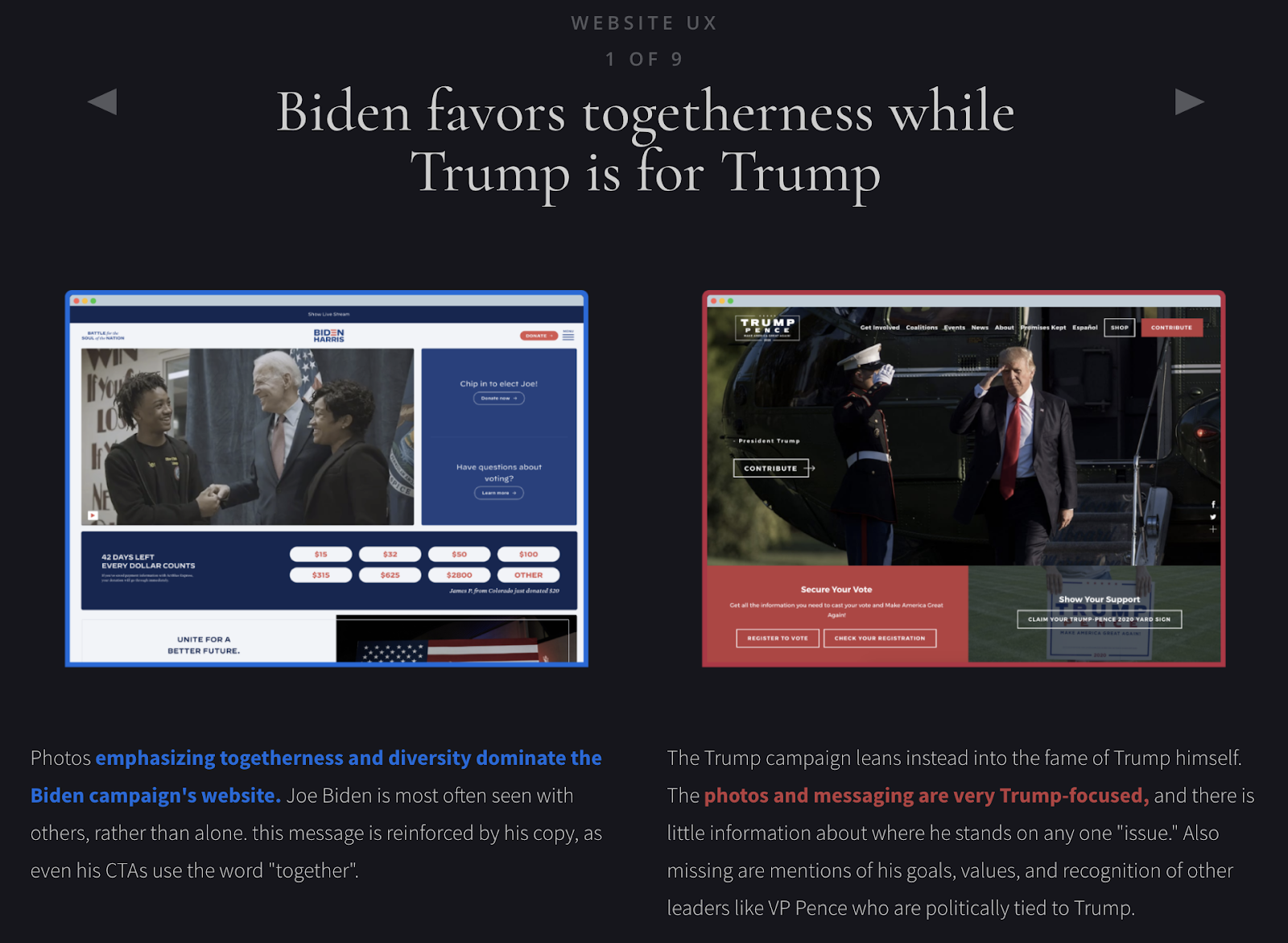 As far as general user experience and intuitive flow, Trump’s site takes the cake. Biden’s site overlooks clear messaging in conveying how to volunteer or get involved, and funneling every user into a narrow set of options. The Trump site uses very clear “get involved” messaging in their header, and gives various actions a user could take in order to show support for the campaign. Additionally, Biden’s website feels busy, and lacks an easily navigable hierarchical structure. Trump’s site is well structured, pushing users to either shop or donate. 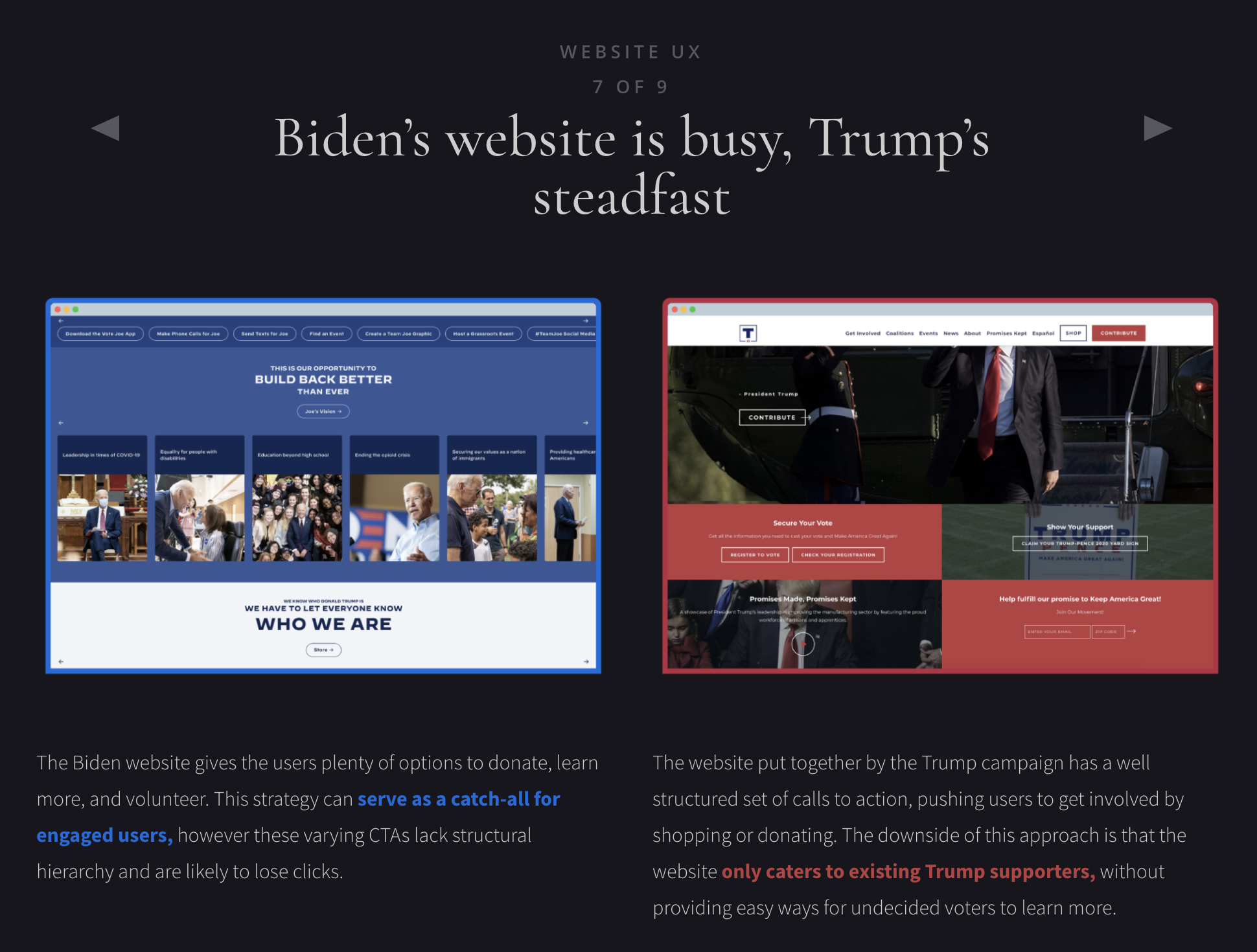 We also couldn’t help ourselves in looking at the 404 pages. Both perfectly represent their target audience: Biden’s responsible mask-wearers, and Trump’s anti-Bidens. 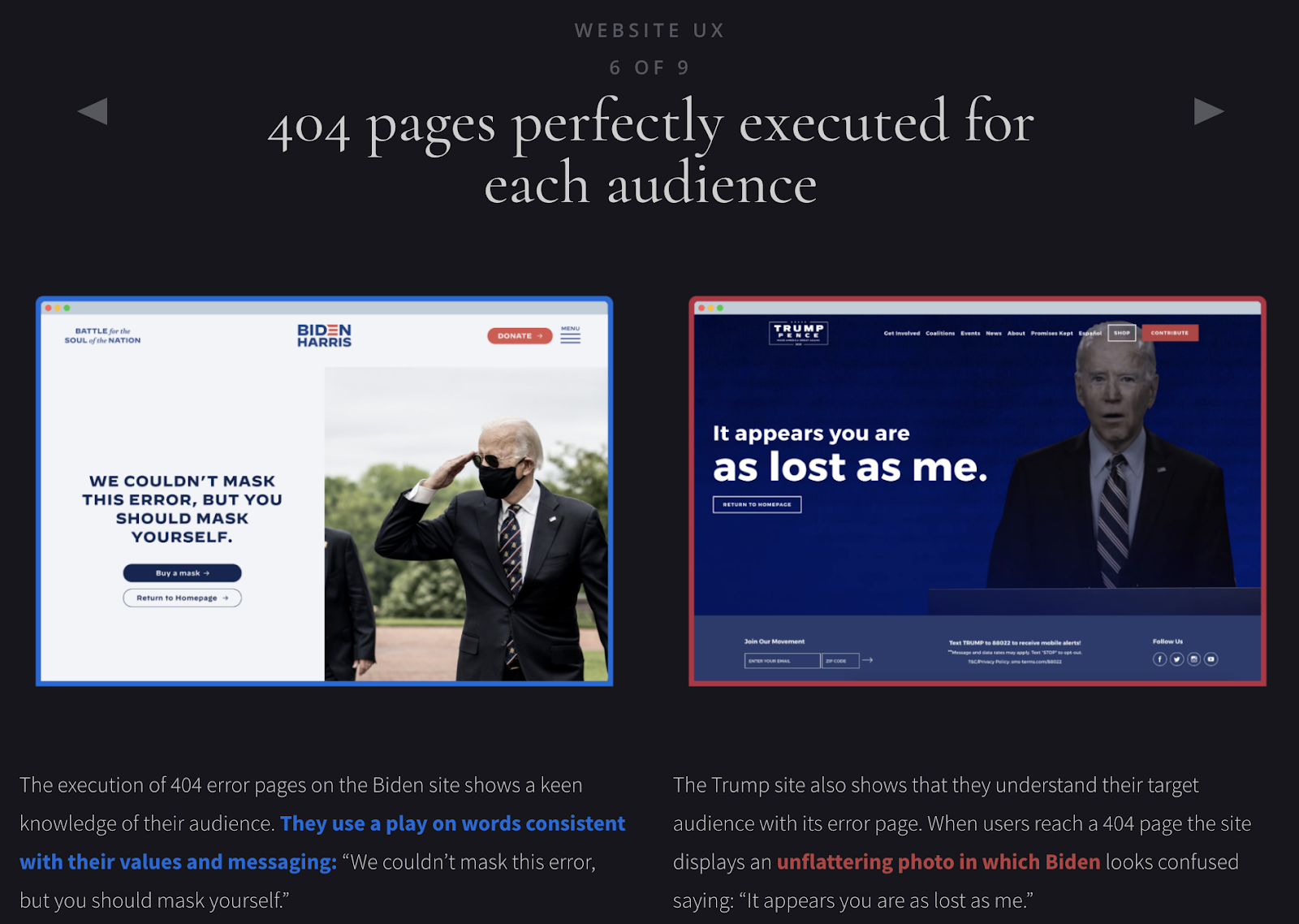 Neither campaign is leaning into search advertising heavily, with text-based search ads accounting for 11.48% and 10.09% of the Biden and Trump campaign’s Google Ad’s budgets respectively. They both make good use of the video elements of Google’s platforms, which may be based on the fact that video is a more immersive experience for the viewer, however it is unusual to see so little budget devoted to image ads given their ability for cheap, but effective remarketing. 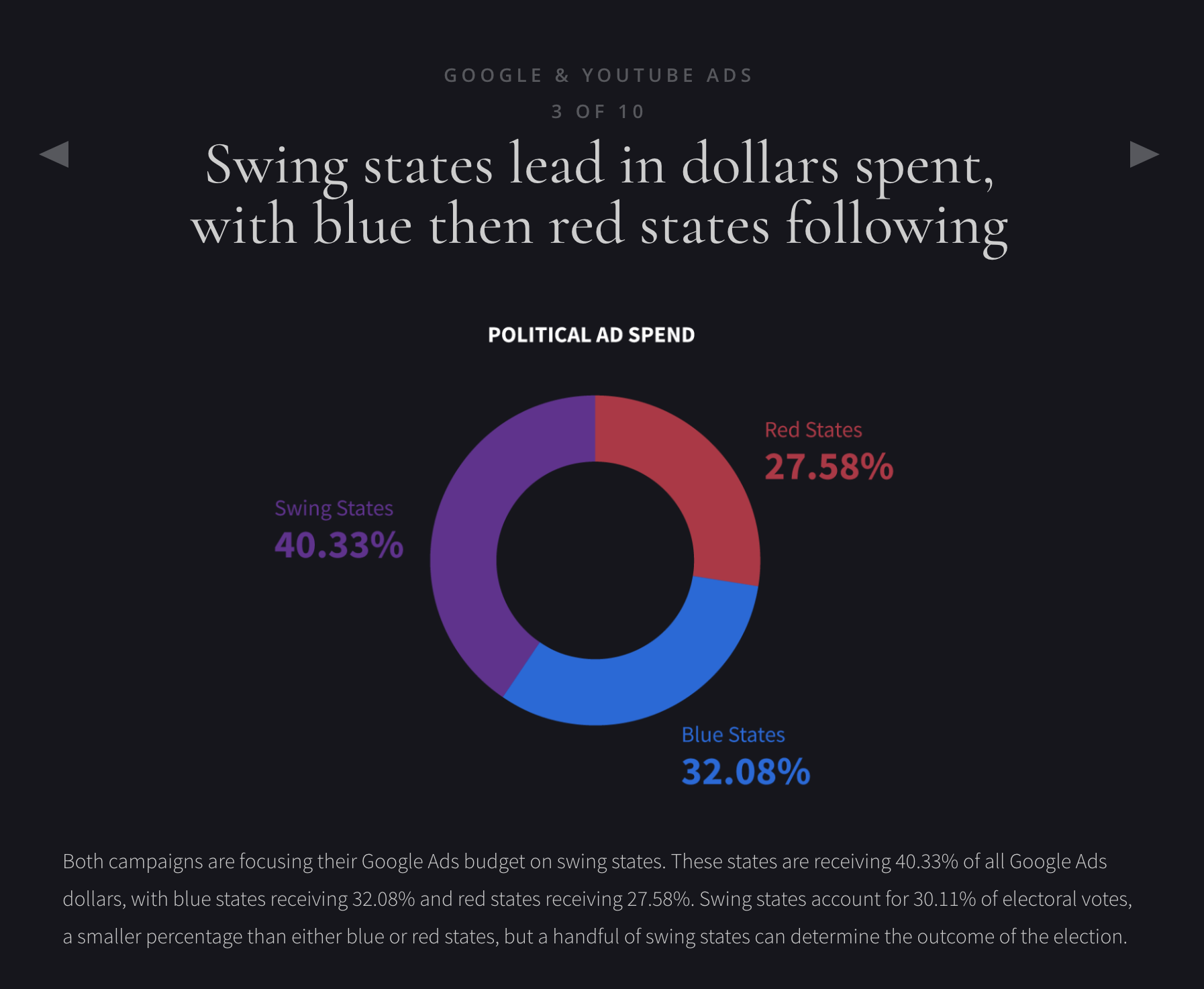 The biggest misstep? The Trump campaign paid for the keyword “how to impeach trump.” One might think that this strategy is fascinating, and indeed it could have been, if paired with the right landing page. But when you look at other terms that received significant clicks, you’ll also find terms like, “speedo swim trunks,” “men’s xxl swim trunks,” “trump is a disaster,” and “trump fraud.” The Trump team was apparently not looking at their own search terms report. This oversight is easily fixable by adding negative search terms to their strategy. 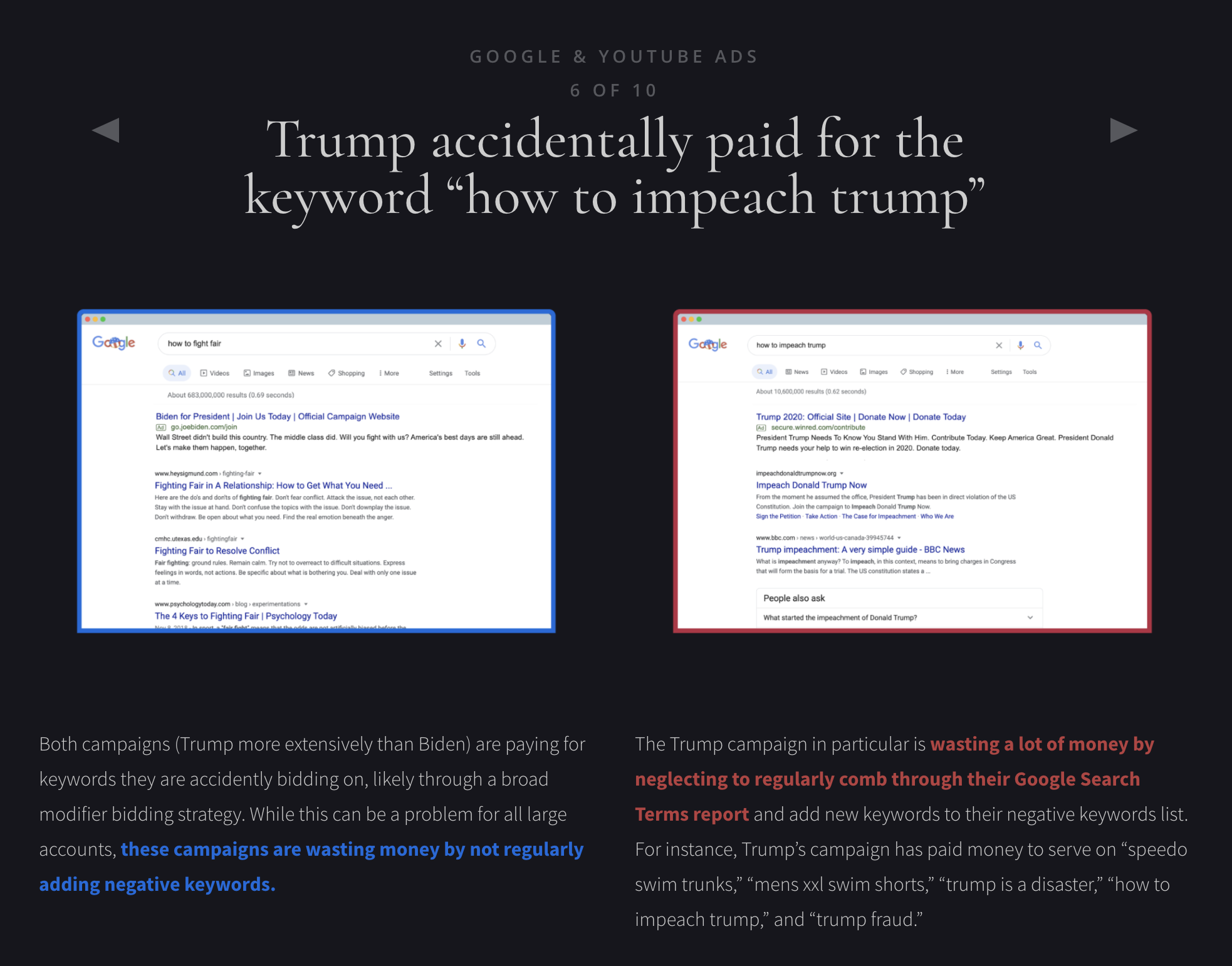 Another key difference in strategy is that Biden’s team is using search to prioritize issues, while Trump’s team is here to sell hats (and other merch). Overall, team Biden is performing better in the Google Ads game. However, this is largely due to the fact that they’ve made fewer obvious blunders rather than their own strength on the platform. 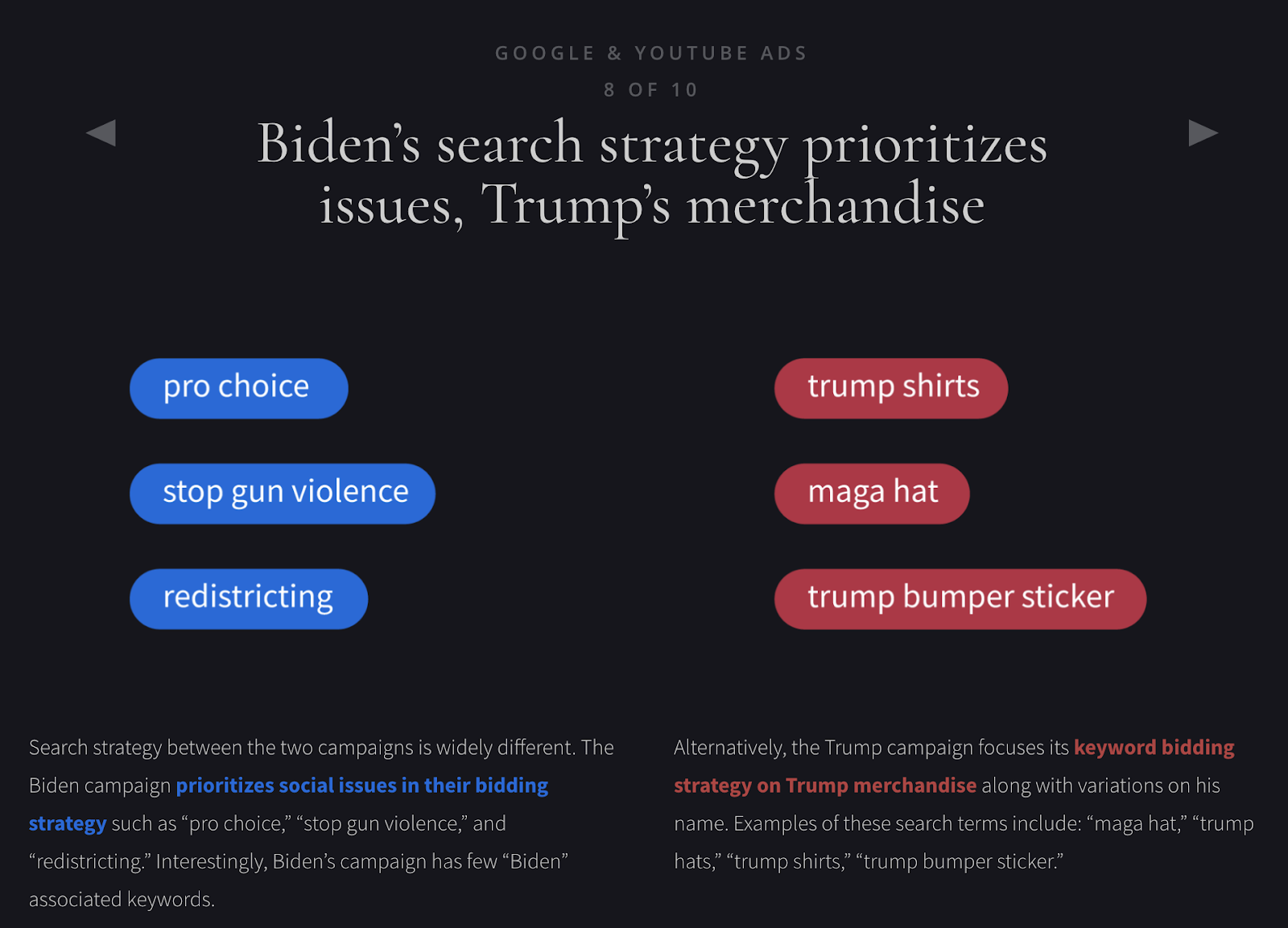 I wasn’t impressed by the Trump campaign’s email strategy. The subject lines are flashy, even misleading, resorting to bait and switch tactics. Trump’s email team is pushing hard for donations. Ironically, however, the Trump campaign falters big time when it neglects to add emails entered into the footer of the website into any sort of followup email funnel.

With an average of 2.7 emails sent per day, one has to wonder about unsubscribe rates on the Trump campaign’s emails. The intended strategy may be to hit the audience hard to get recurring donations before they unsubscribe due to email fatigue. 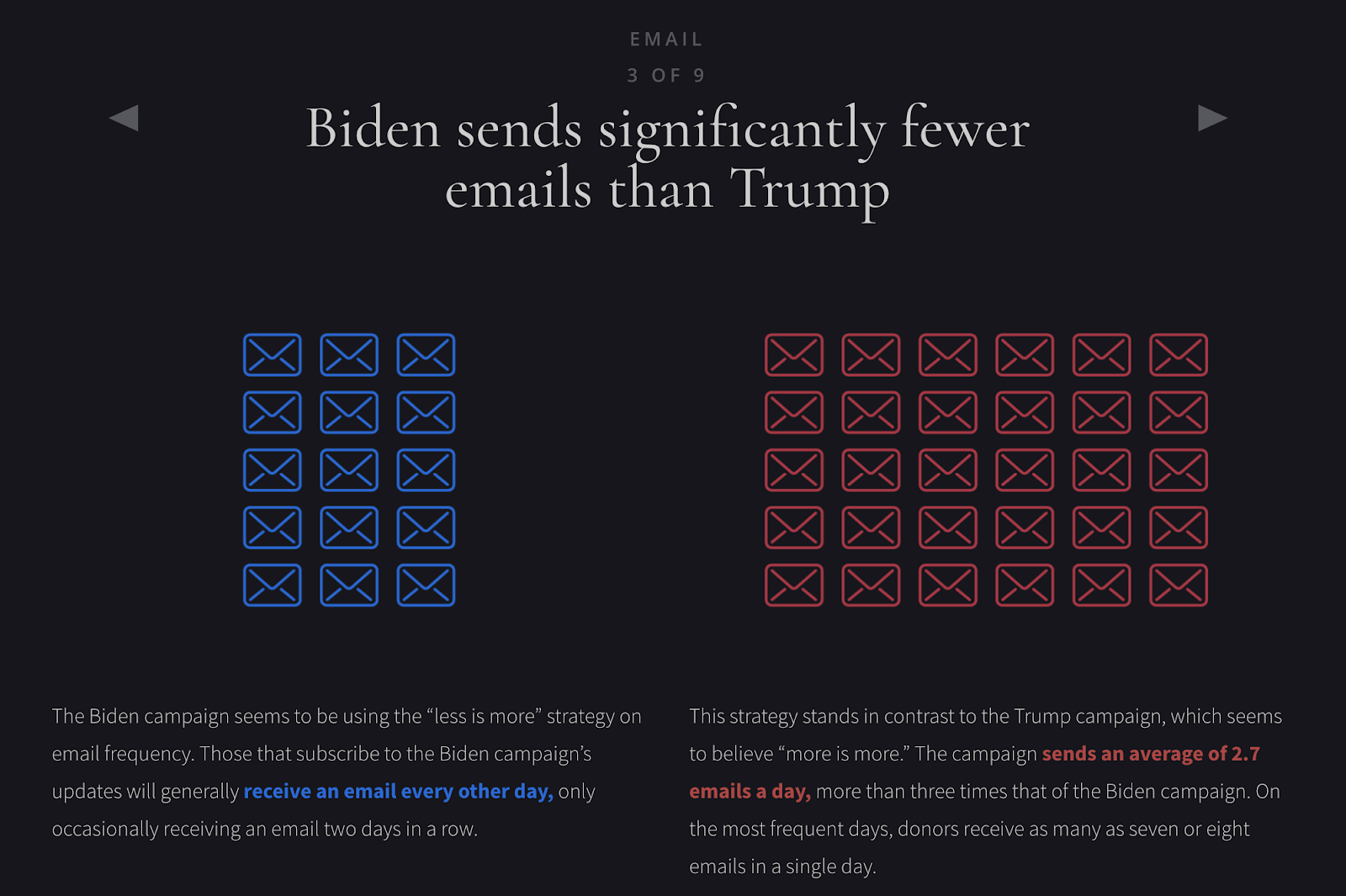 The Biden campaign, on the other hand, seems to want to turn subscribers into advocates, only occasionally asking for donations. His campaign sends significantly fewer emails than Trump’s, with an average of one email every other day. The Biden campaign keeps the issues of their campaign central, and their subject lines helpful and professional. Overall, Biden’s email strategy has a clear advantage over Trump’s in its use of best practices. 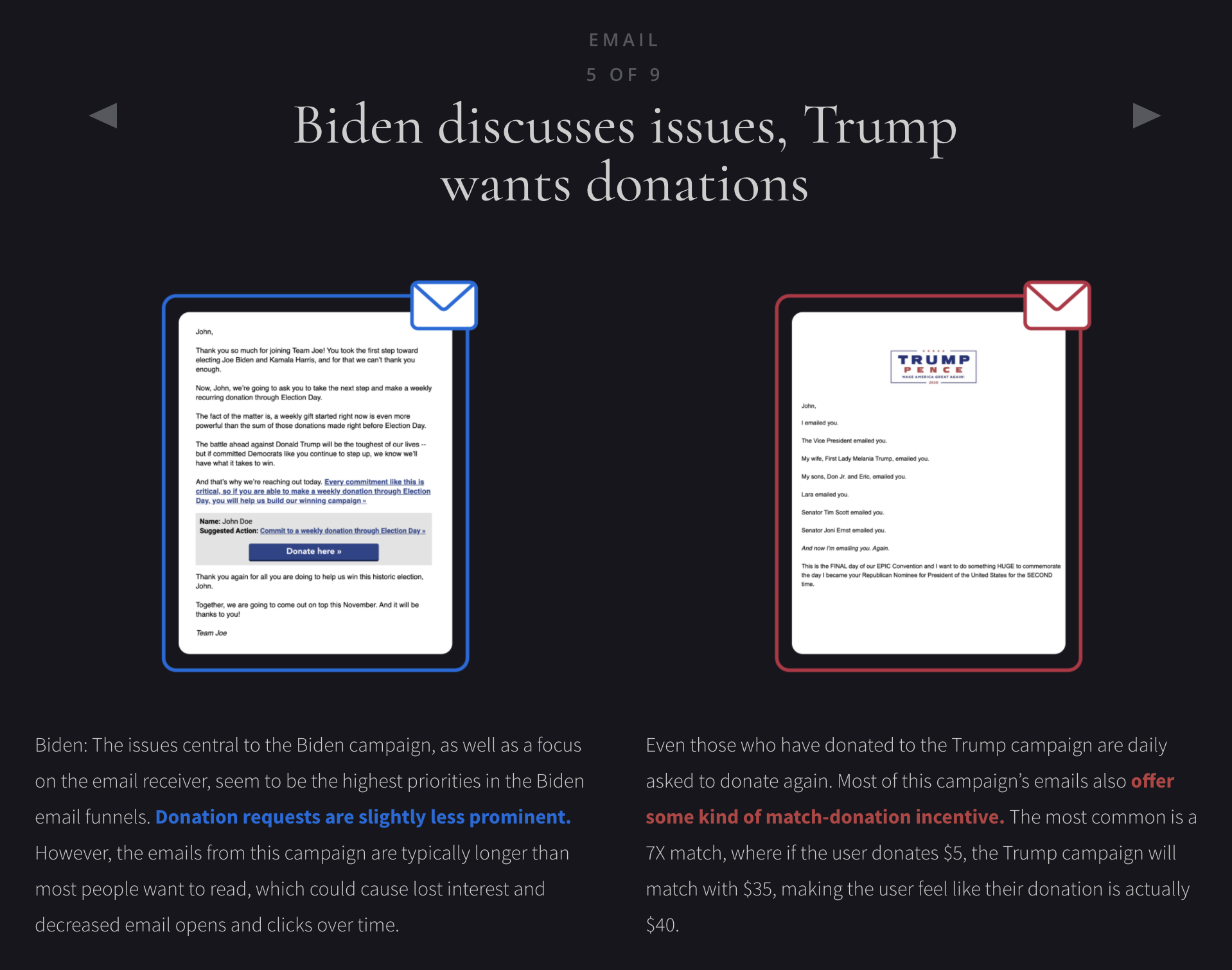 Both candidates are running predictable and moderate social media campaigns. Biden is more active on Instagram than Trump, but it’s still surprising that neither candidate makes greater use of Instagram, considering the app’s large demographic of young, often swing voters.

The campaigns’ followers describe themselves in predictable ways: “she/her,” “feminist,” “activist,” and “liberal” for Biden and “KAG,” “patriot,” “conservative,” and “retired” for Trump. However, with only 1.3% of crossover between followers of these accounts, users are essentially tweeting into a political echochamber. It’s also interesting to note that in an analysis of how Biden and Trump advocates speak on social media found that Trump site visitors are twice as likely to talk about the opposing party compared to Biden site visitors. 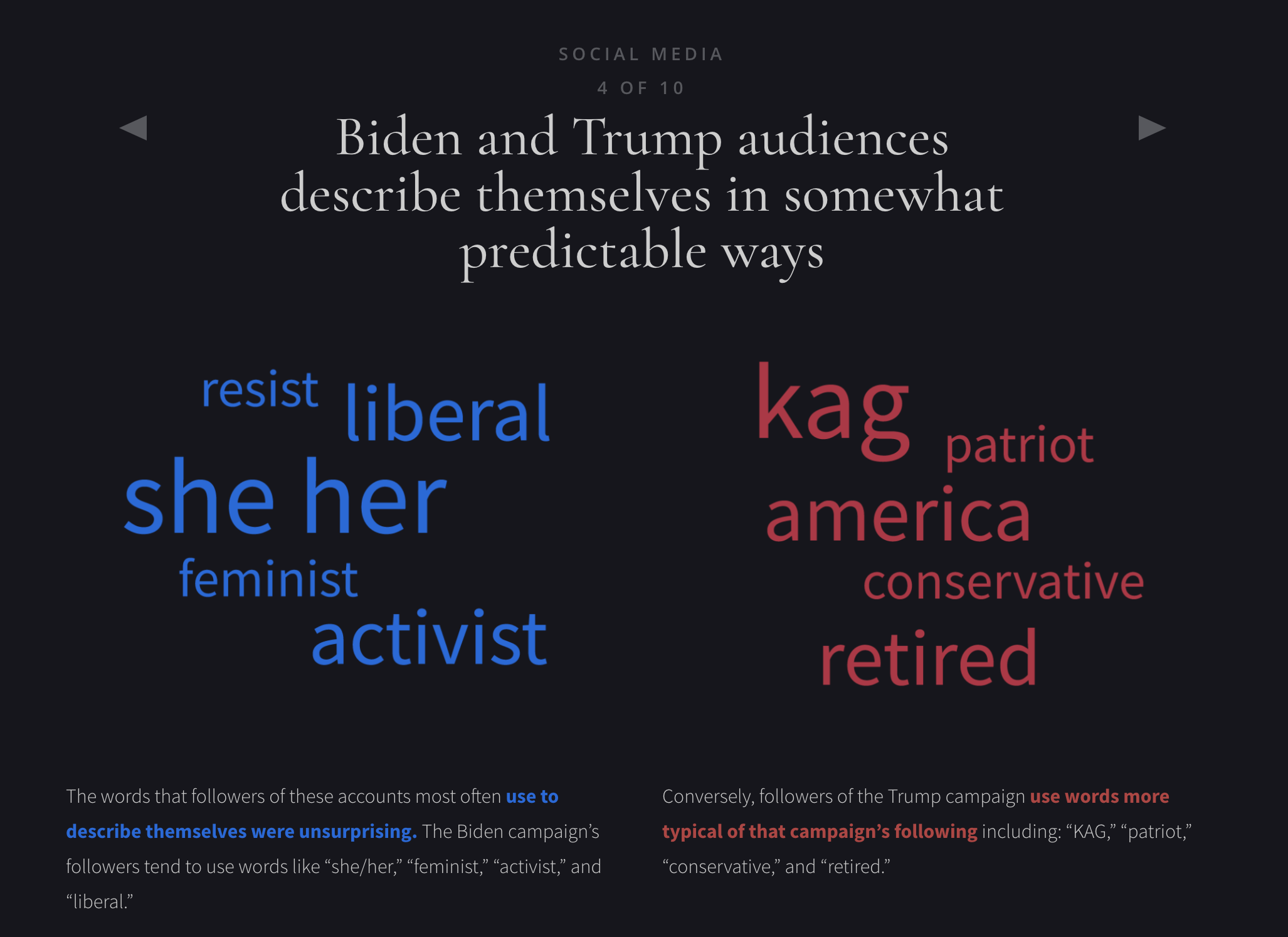 The most creative social media push from either the campaigns is the Biden campaign’s podcast. This is new territory for presidential campaigns, and while its success has been mostly negligible (it seems Biden supporters are more likely to engage on other channels) it was a creative effort. 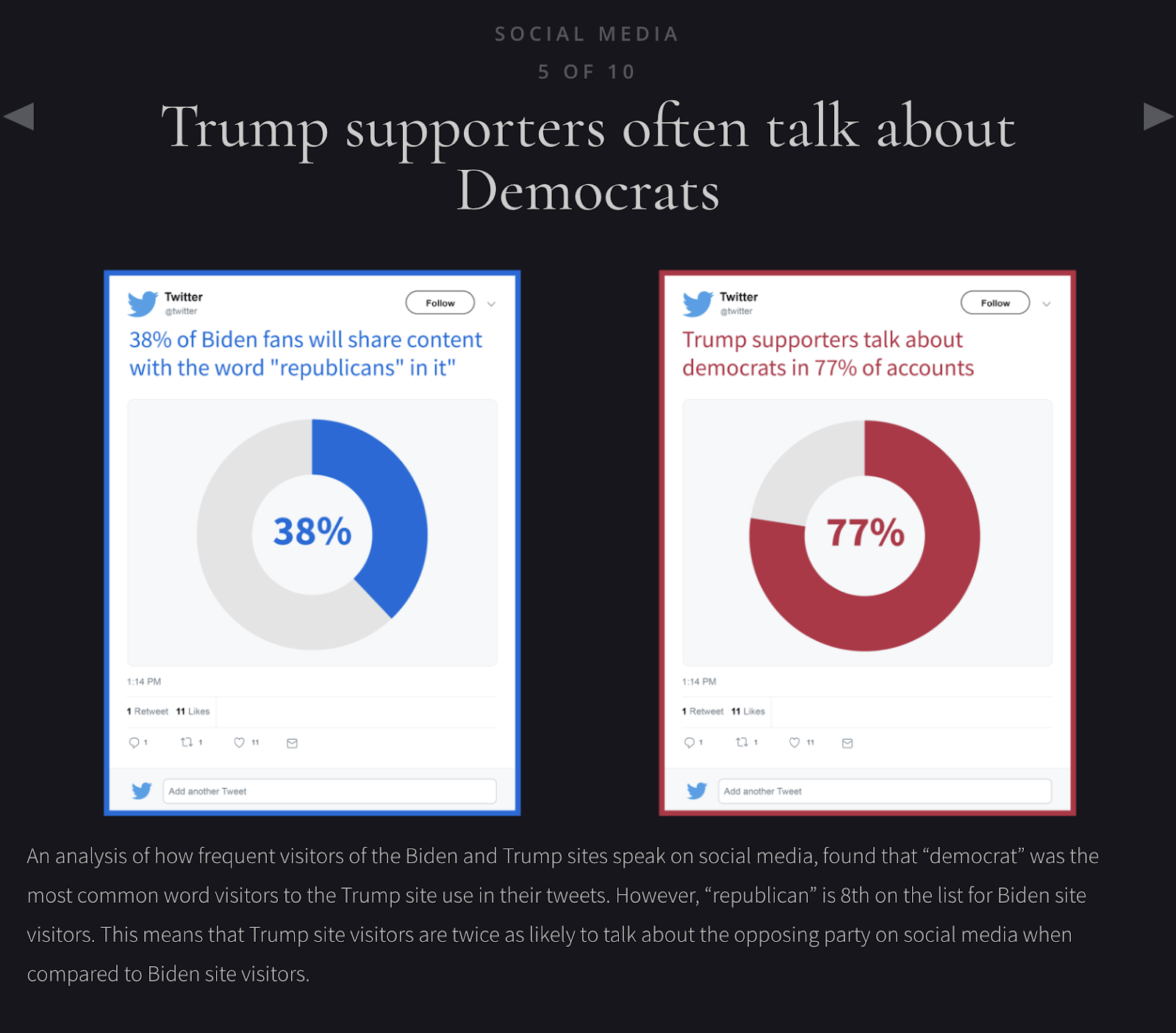 The Trump campaign uses divisive ads, intending to both sow distrust in leaders of the democratic party, and raising funds. These ads often include asking users to take a one-sided survey with titles such as: “Official Democrat Corruption Accountability Survey.” These tactics might be duplicitous, but we’d also give them some credit for stepping outside of the box. Both candidates ask for donations, just with a different focus. It seems likely that Trump is receiving more funds from his tactics, but Biden is likely creating more “ownership” from those who do support him by focusing on specific issues and local state battles. 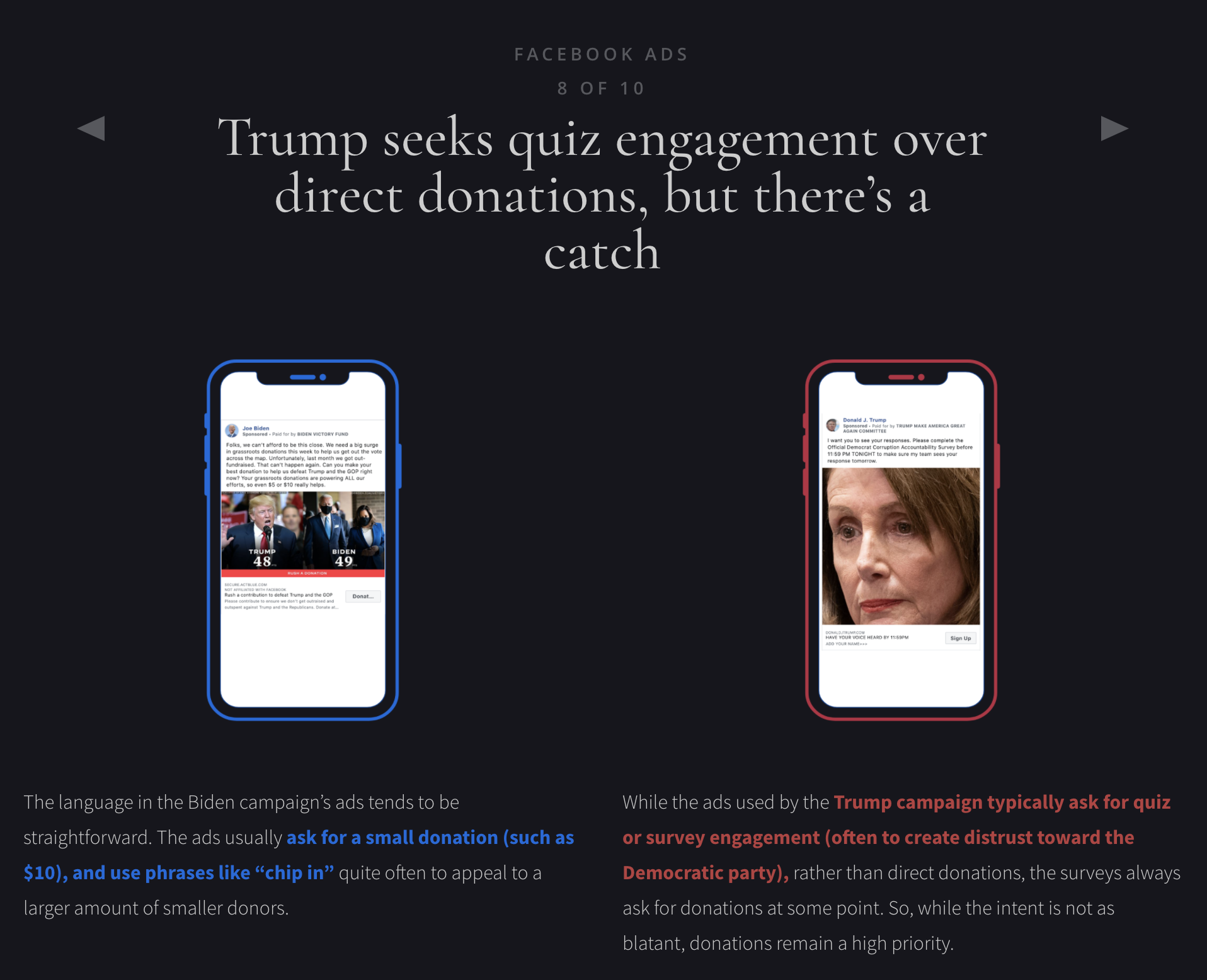 Both campaigns run well-timed ad campaigns with a focus on state-driven ads, a smart strategy for their specific aims. The Trump team consistently spends more but the Biden team places a greater priority on swing states. The Biden campaign spends more in three of the five top contested states, while Florida gets the most attention from both budgets. And, while the Trump team consistently spends more, the Biden team is moving fast, increasing their spending quickly over the past three months. 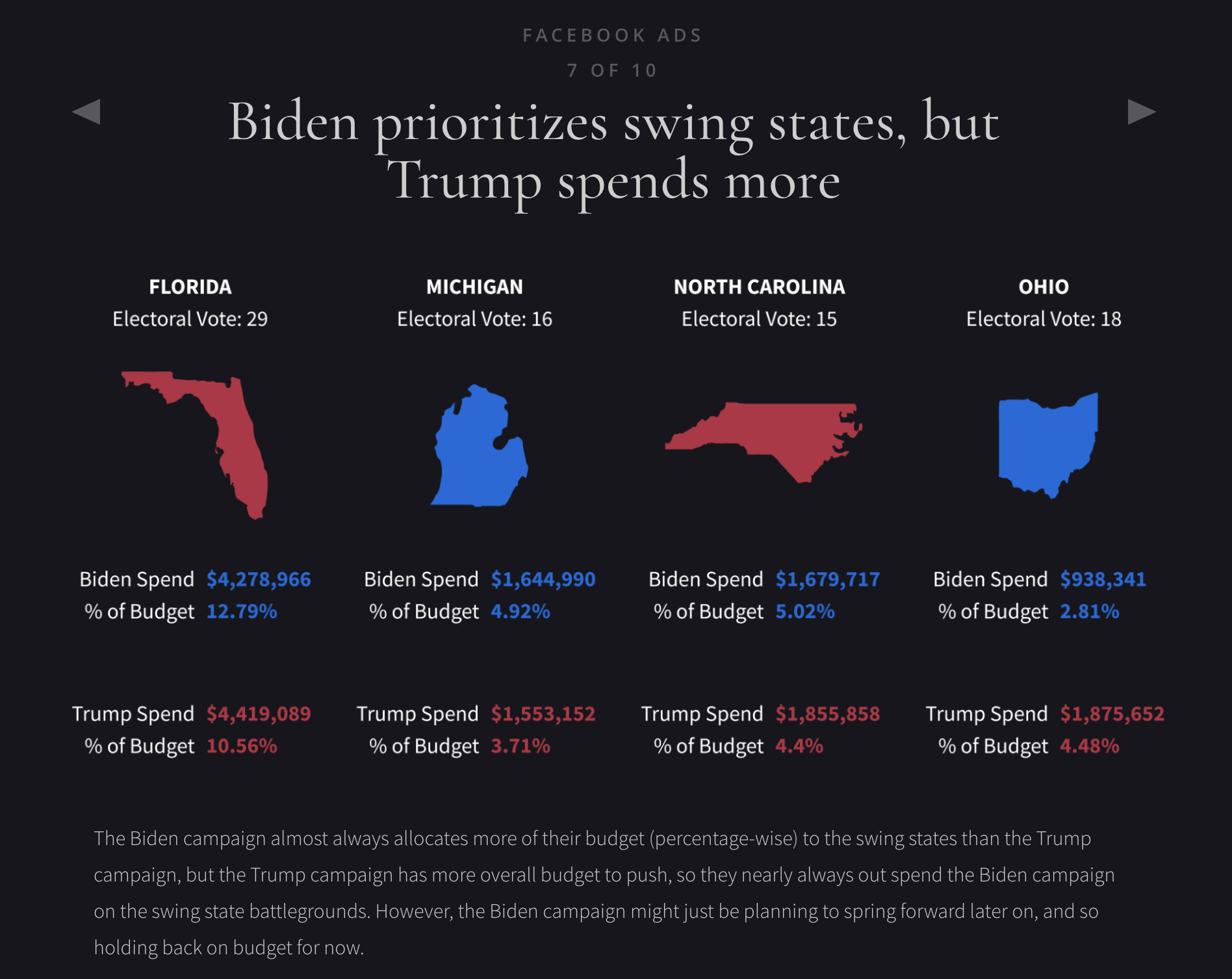 Many know that SEO is renowned for its lengthy timeline to see results. So, with a fast-paced campaign like the presidential elections, SEO is, and really should be, a lower priority. However, both campaigns are making some pretty simple SEO mistakes that could be avoided with a simple two-hour audit. And, no matter the priority, easy fixes like that are always worth it. 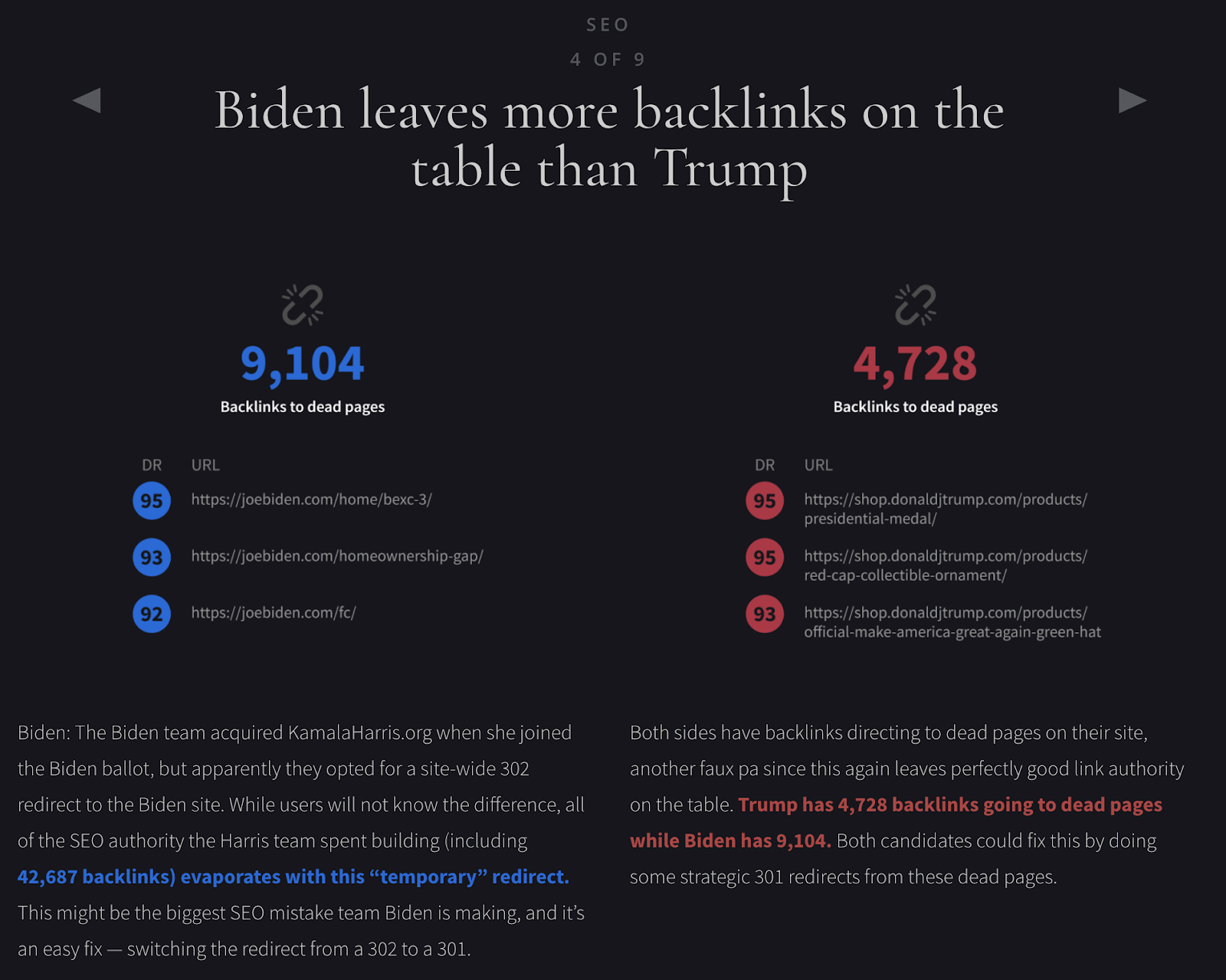 Currently, the Trump team leads in gross organic searches. This is likely due to the fact that their top keyword “trump” has a 10X lead on the Biden team’s “joe biden.” However, the Biden site has the barebones of a non-branded strategy, with pages for terms like “gun safety” and “immigration.” They also make fewer elementary mistakes (homepage errors, missing H1 and H2 tags, the absence of canonical links, poor meta descriptions). While the Trump site carries more weight at the moment, if the campaign were to run for years rather than months, we’d put our money on the Biden site faring better over time. 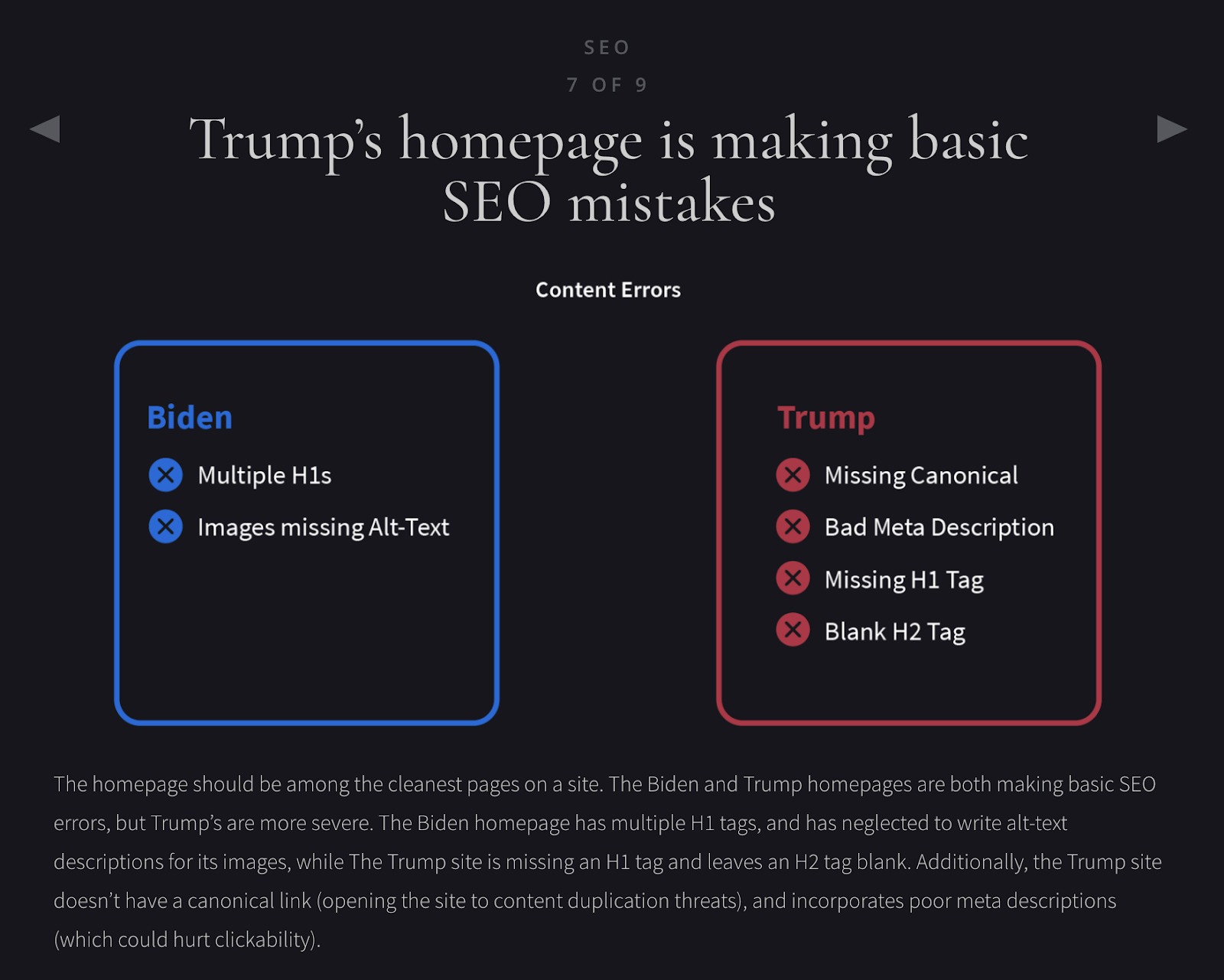 A candidate’s logo is the centerpiece of the entire campaign. It reflects the values and strengths of a candidate. Logo design goes to Biden for its ability to be transferred to different colors and backgrounds, but Trump makes better use of logo variations for different subgroups. Their campaign colors match their demographic targets. The Biden team chose a bright navy and candy apple red, imbuing a lively, youthful energy, while the Trump team opts for a dark, rich navy and deep, crimson red to suggest seriousness, and an established foundation.

Looking to the campaign sites as a whole, the Trump site is more intuitively designed. Biden focuses on the human element, with copy like “chip in” and a casual, friendly lifestyle video. Trump’s site makes use of a full-screen design, maximizing on-page real estate and making mobile transition easier. 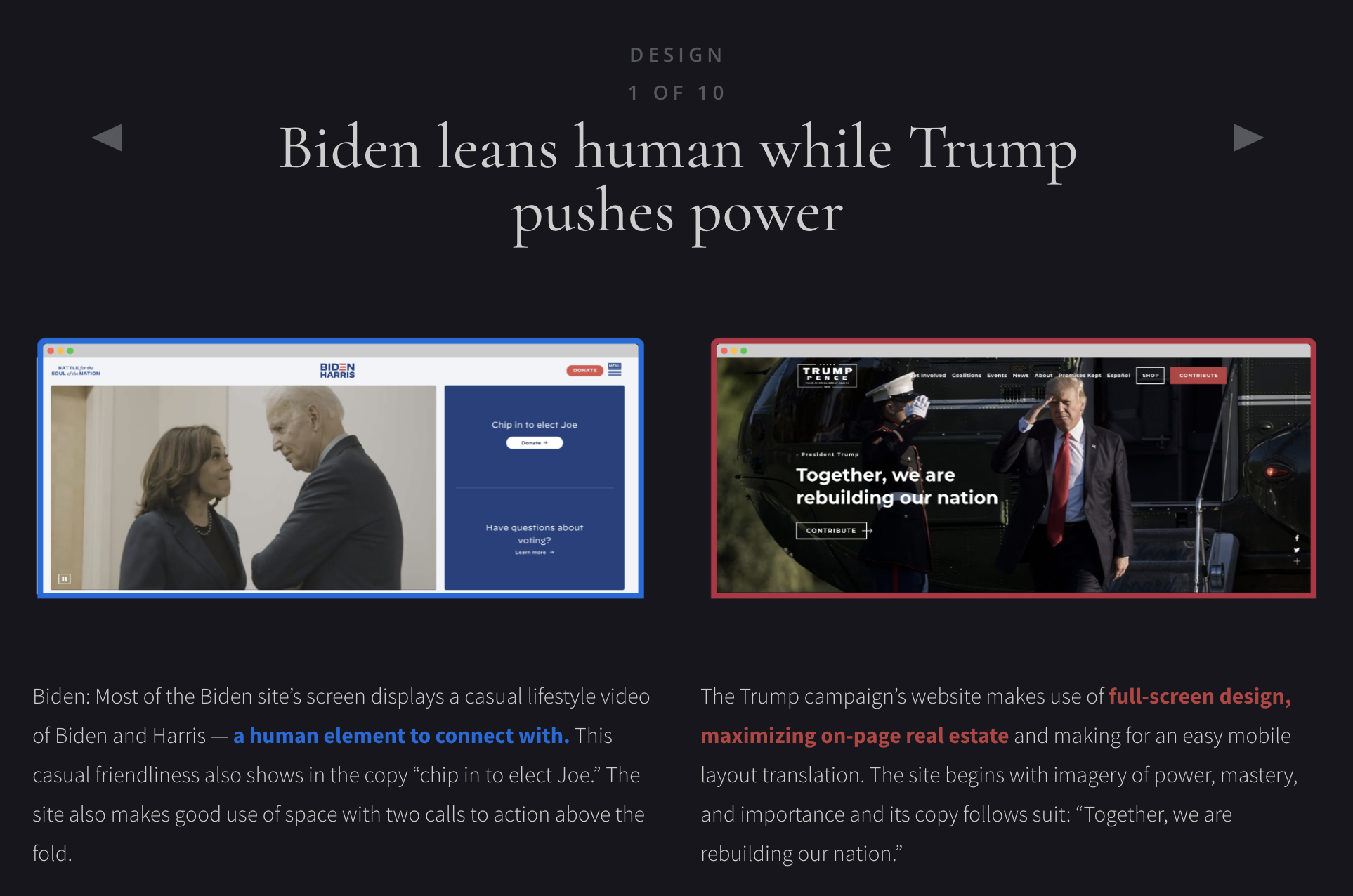 The Trump app is a conversion machine, while the Biden app feels like a bit of an afterthought. Trump’s app holds the hand of the user throughout the entire app experience, with easy navigation, clear calls to action, and incentives for those who donate. Biden uses his app to share his vision, conveying a sense of togetherness and altruicity. 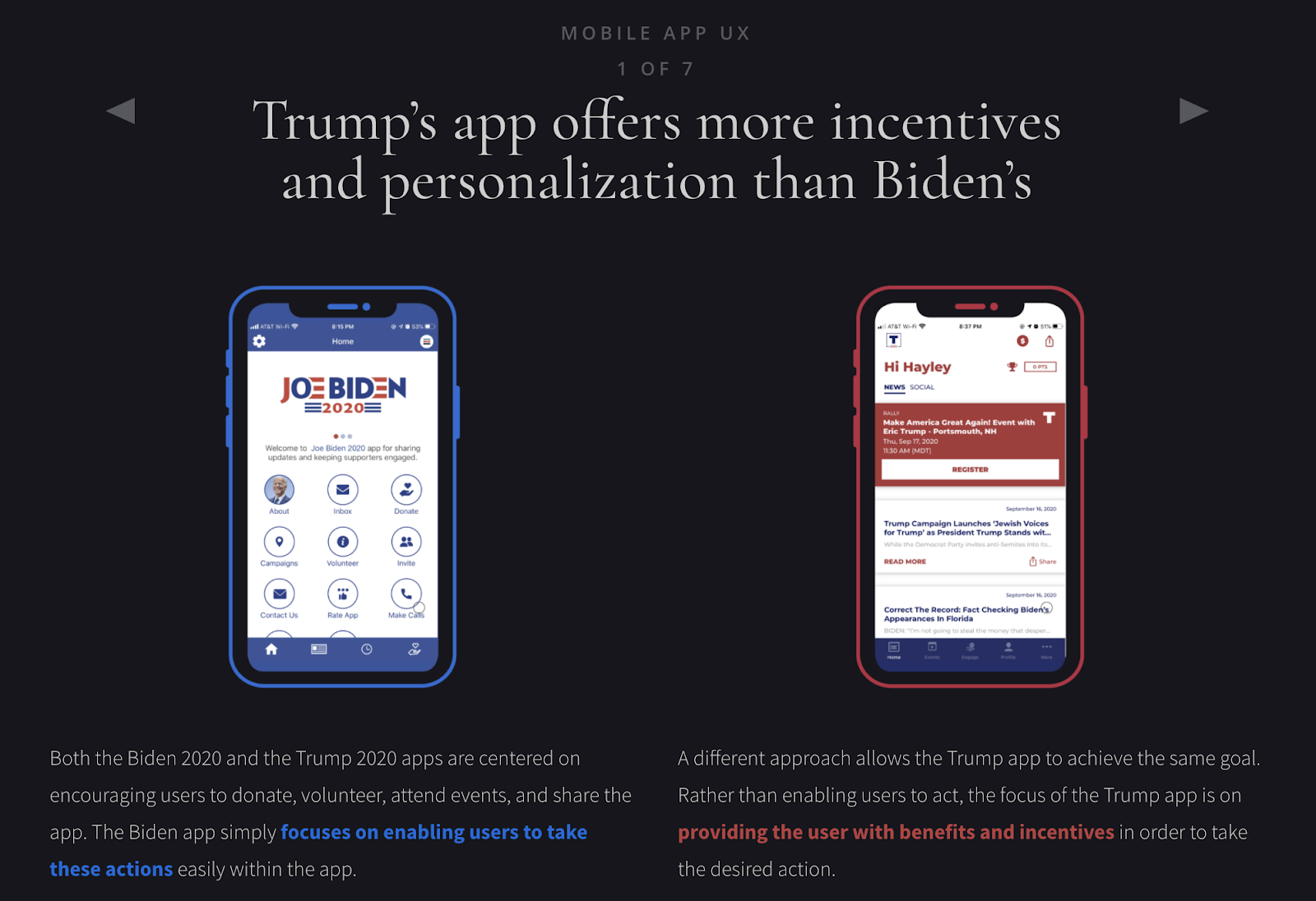 While not an essential part of a campaign, superfans will certainly download and use the campaign apps, so it’s definitely not an avenue to ignore. Both apps could definitely use some attention, but overall, the Trump app makes better use of the unique app format by giving benefits that are only available in the app. 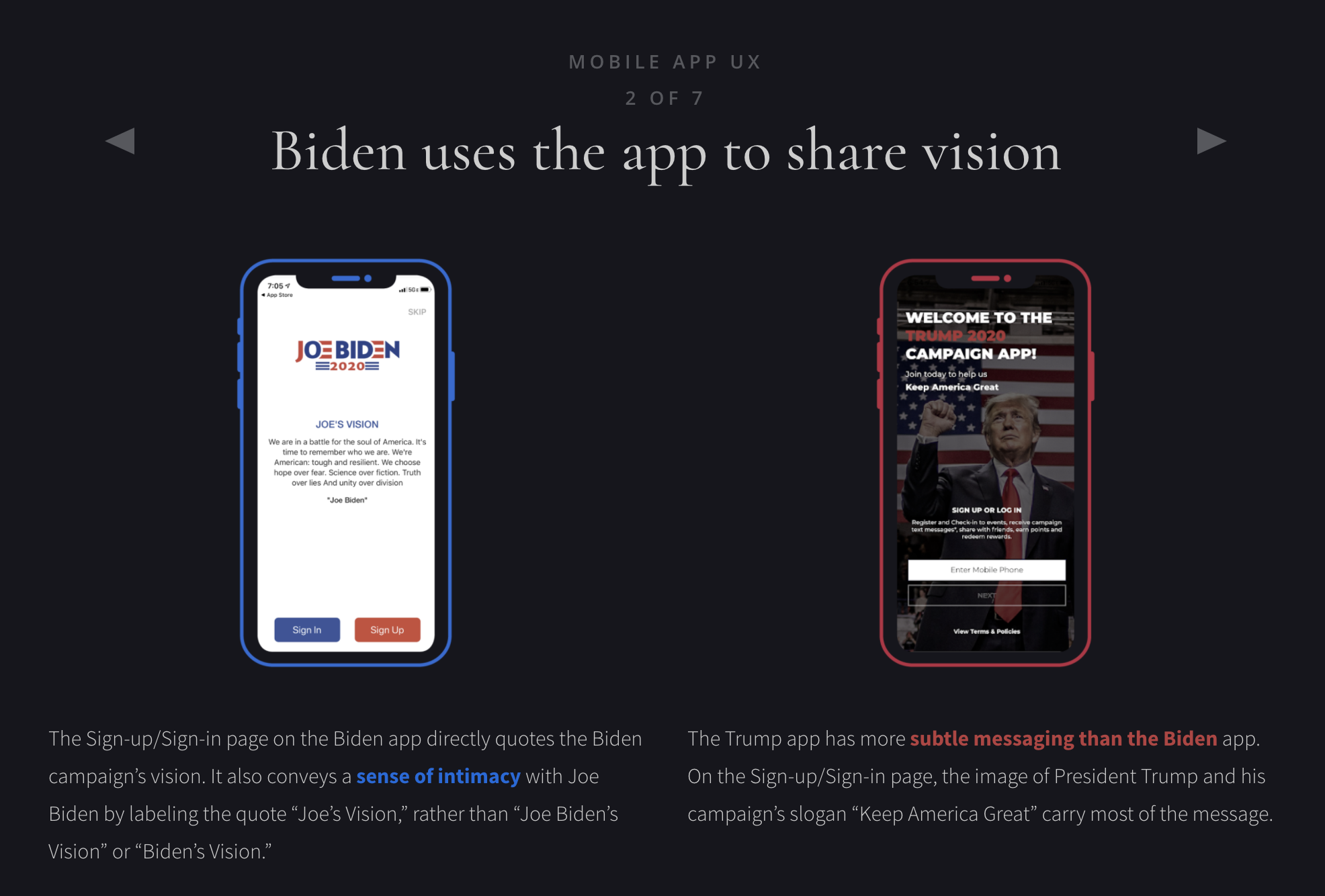 Commercial strategy might be the greatest failing in the Trump team’s digital campaign. Their strategy is largely national, with little attention to specific state markets, including swing states. For example Florida, the state that has the most money going into it from both candidate’s Facebook and Google Ads, is being completely ignored by the Trump campaign. This is hardly strategic, seems more like an oversight. 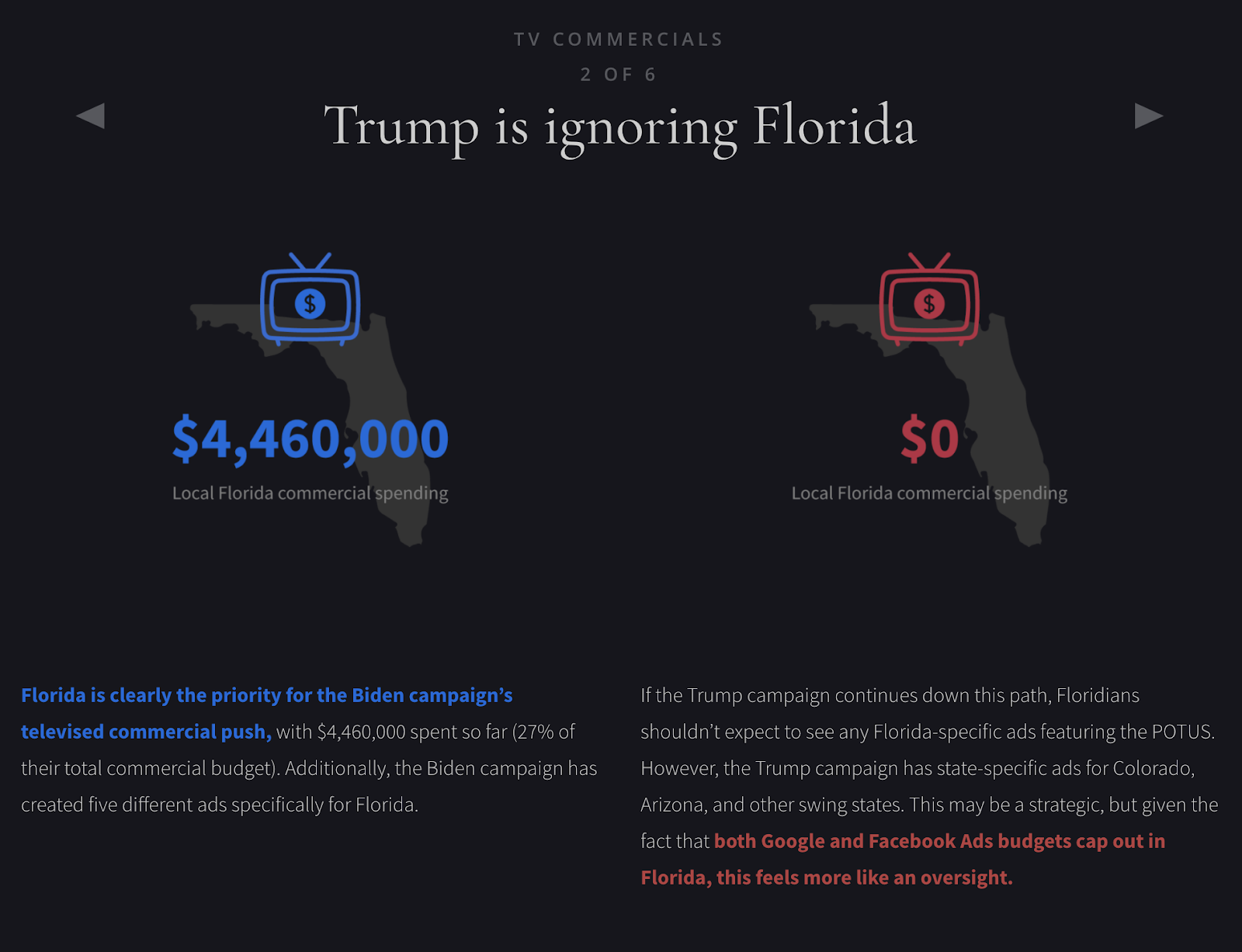 Additionally, the Biden campaign has created commercials in Spanish, giving the Spanish-speaking audience the attention they merit. This is something the Trump campaign has not invested in. Interestingly, while Trump outbids Biden in nearly every other channel, their television budgets are practically identical.

Back to the big picture

While both campaigns run fairly predictably, and we see little innovation, both are keenly aware of their audience and goals. The focuses of the two campaigns become apparent in the details of the decisions they make: what they invest in, what they overlook, and how they approach each channel.

My very broad conclusion is that the Trump campaign focuses significantly on donations, while the Biden campaign urges users to vote. Additionally, the Trump campaign makes no apologies for the type of content and tactics they employ, but I don’t think their target audience minds. Biden’s campaign might be a bit reserved in its tactical approach, but the strategy is sound.

While the marketing is (as best as it can be) non-partisan, one can’t help but see the attitudes and priorities of these leaders permeating each campaign. Marketing and the product are two distinct aspects of any organization, but in politics as with most organizations they are melded.

See every insight at GetThatVote.com.